A “Seminar” to Remember: The writing process dissected for wry laughter at The Ahmanson

Leave a comment Posted by Frances Baum Nicholson on October 27, 2012 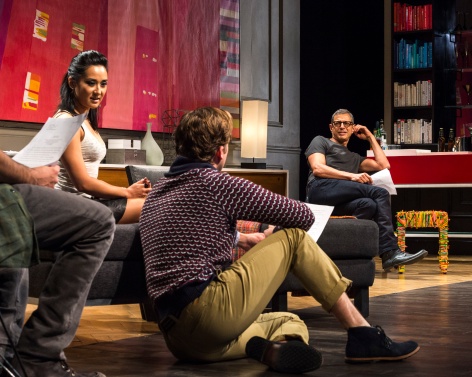 We have all become familiar, by now, with the concept of the “master class” – that point at which a budding musical talent plays for a great artist, in front of an audience, and that artist then offers words of wisdom to help the younger person improve his or her performance. Some may be less familiar with the writing workshop, where a successful published author gathers younger or less successful writers, reads their work and offers commentary upon what can be done to improve their work or make it more marketable. It can be illuminating. It can be grueling. Worse, particularly if you are the person whose work is torn apart, it can be honest.

Which forms the base for “Seminar,” Theresa Rebeck’s wry, sometimes dark comedy now at the Ahmanson Theatre. Here a group of writers, who rate from A to Z on the pomposity scale, have gathered in a New York apartment to hear their work evaluated by a famed if eccentric novelist. What ensues is a series of character studies, as people must handle the seeming brutality of a man who uses the truth to batter those he must serve to make a living. The more you know about the writing process, the funnier it all is, and yet the more disturbing at the same time.

Most certainly, as the famed author states up front, “Writers in their natural state are about as civilized as feral cats.”

Jeff Goldblum is Leonard that author – brutal, brutish, easily distracted by his own thought processes, and fascinating even to those who loathe him. In Goldblum’s hands he becomes a rather weedy-looking, oddly logical force of nature.

Lucas Near-Verbrugghe, as Douglas, the popular novelist dripping fame and platitudes, embodies the name-dropping success other writers will dismiss even as they envy. We’ve all met this guy. Jennifer Ikeda has a great time with the visceral, sexually fascinated Izzy – a fine writer who lives out her obsessions.

Aya Cash embodies the writer on the cusp of growth, as her Kate moves from despair to freshness in several parts of her life while in the very act of defying Leonard’s definition of her work. Perhaps most interesting as played is Greg Keller’s Martin, an introvert whose admiration of the Beats has him chasing his tail and sponging off of others rather than moving his admitted talent forward.

This remarkable ensemble cast achieves a seemingly effortless sense of life flow thanks to the precision of Rebeck’s words and the artfully invisible hand of director Sam Gold. He manages to keep anyone from becoming permanently loathsome, even as their pointed commentary sparks laughter and the occasional squirm of recognition. Kudos also to David Zinn for costumes and sets which create instant definitions and flesh out this already telling set of portraits.

“Seminar” uses brutal language to go along with its brutal characterizations. Do not go if the “f-word” disquiets you. Yet the sheer honesty of the appraisals, the genuine nature of the back stories, even the results of this ferocious encounter proves funny and fascinating, and has something fairly important to say about the difference between art and nurture. Go, if you dare. Honesty can be hard to take sometimes.

Review Ahmanson Theatre, Jeff Goldblum, Seminar, Theresa Rebeck
← Death of a Salesman: The great play staggers a bit in Covina Morality’s the Thing: Well-played ethical wrangling in Shaw’s “The Doctor’s Dilemma” at A Noise Within →