Like Watching a Train Wreck in Slow Motion: “Doctor! Doctor!” at Stages of Gray 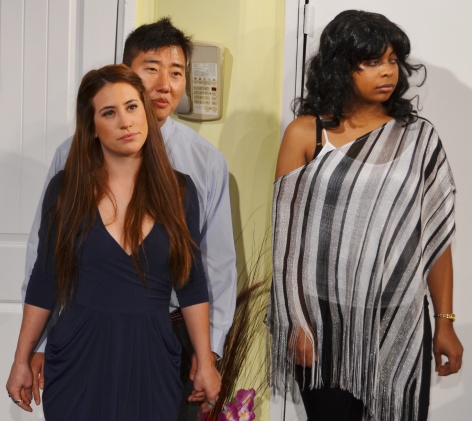 Christine Cater, Rich Lee and Sarajane Williams look rather disquieted by performing in “Doctor! Doctor!” at Stages of Gray

Hubris is an amazing thing. The first tell-tale sign of it in “Doctor! Doctor!”, the new show at the brand new Stages of Gray in Pasadena is the most obvious. The man who wrote this piece (it is difficult to call it a play), and directed this piece, and produced this piece is also the person after whom this new small theater is named. The program already touts it as “The Newest and Best Intimate Theater Venue in Los Angeles County.” This before a single word of critique has been written about it or the folks who populate it. It might have been better, on all counts, to let the work and the space speak for themselves.

Randall Gray’s production purports to be about “recent legislation” surrounding health care – a statement which intimates that it will be about Obamacare. It turns out the thing was written in 1991, and is based on legislation which never went through, which would have created medical clinics with multiple specialties, allowing a person to pay one fee to see all the doctors in the place. This is about one such office, and the comedy which would ensue if a glut of medical personnel tried to work together.

Which gives the impression that this thing has a plot. There is almost a plot, I suppose, sandwiched into what becomes essentially a karaoke concert. For anyone who has sat through a night of karaoke, you know the variable quality of performance that implies. Here, it fits, but comes accompanied by an even more uneven – and in some cases nonsensical – choreographic enterprise.

Christine Cater, Sarajane Williams, Claudia Zielke, Michelle J. Feng and Wendy Rostker play doctor’s assistants and nurses at this supposed clinic. Every once in a while, they even talk as if they know about being in a medical office. Most of their time, however, is spent acting out one of various female stereotypes: the former cheerleader turned gold digger, the gum-chewing bimbo, the officious and oversexed “typical” Black woman, the efficient girl who sees a career as a conduit to marriage and – and we will talk more about this – the older woman sexually obsessed with her boss. 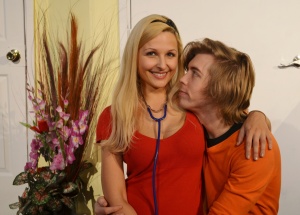 That is when they are not singing disco hits, complete with pink lights and a mirror ball.

Oh, and then there are the doctors. Rich Lee is the great stone face. J.D. Driskill is the “Doogie Howser” youthful type, evidenced mostly by being able to dance like Michael Jackson. Neil Lewis is the startlingly (in this show) nonstereotypical, businesslike, African-American gynecologist. Mark Colbenson actually has comic timing and a certain ability to rise above the fray (perhaps because he doesn’t really sing any of the songs) as the psychologist, although his lines consist mostly of “get in my office and lie on the couch!”

Jon Christie is actually the best, or at least the most consistent, of the performers, playing the deranged dentist – a part which basically is Jim Carey at his most manic as the dentist from “Little Shop of Horrors.”

Cody Bushee plays the rich guy (inexplicably equipped with a corn cob pipe), while Sarah Davenport shows up briefly as a very pregnant lady convinced that this office will kill her baby. Certainly, if their attention to detail elsewhere is any evidence, she may be right.

This show is supposed to be funny. We get this, as Rostker, the older, obsessed medical assistant, appears on stage to start the show, mugs, does inexplicable things to the set’s chairs, mugs some more… and precedes to deliver her lines, once she has some, with a care to make a face between each sentence. Indeed, this opening should be treated as warning: there will be no comic timing from this point forward.

Frankly, Randall Gray should be ashamed of himself. The night I saw it, he was often the only person laughing, or the one laughing the loudest. It bodes poorly for this company’s future. His concept is poorly executed, and the show ends up as a triple threat: his cast (for the most part) can’t sing, can’t act and have no script worth trying to follow. On the second night he was already begging his audience to stay past intermission (which hits 90 minutes in). Take the hint.

The next show at this venue is to be “Born Yesterday,” a great 50s play intended for one of America’s great comic actresses and saying much about the world of Washington in the mid-20th Century. If he can get a cast up to the challenge, and invest the production with comic timing so that the message is deliverable, it could be a hit. Maybe. Not really holding out much hope at this point.

Review Doctor! Doctor!, Randall Gray, Stages of Gray
← “Backbeat” – The story of a little known Beatle makes for tuneful melodrama The Art of Comedy: The sheer delight of “Fallen Angels” at the Pasadena Playhouse →

5 responses to “Like Watching a Train Wreck in Slow Motion: “Doctor! Doctor!” at Stages of Gray”