“All My Sons” in Whittier: Community theater tackles a classic

Leave a comment Posted by Frances Baum Nicholson on February 26, 2013 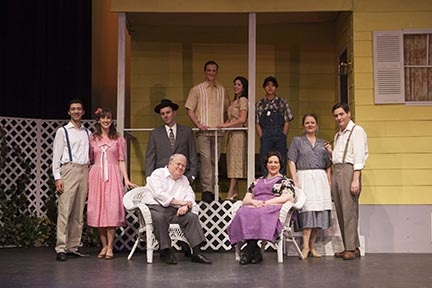 The cast of “All My Sons” at Whittier Community Theatre

For many, both in theatrical and literary circles, Arthur Miller stands out as the greatest American playwright of the 20th Century. His plays used classical forms and modern references to examine universal themes of contemporary morality, from the empty ideals of a Willie Loman, the rushes to judgement represented by the Salem Witch Trials, or the choices of the powerless in Nazi Germany.

In one of his first, and most powerful plays, “All My Sons” the battle – still very present today – between free enterprise and ethical responsibility wrenches apart that most sacred of American icons, the nuclear family.

In a new production at Whittier Community Theatre, much of the power of this classic play is on display. The direction is intelligent and the pacing keeps the passions moving. Most of the actors are up to the task. It all adds up to a fairly pleasant revisit with this great work.

We are at the home of Joe Keller, a small town Midwestern manufacturer who both made and marred his fortunes during World War II – a war in which his elder son died. He was imprisoned along with his business partner for selling defective parts to the Air Corps, resulting in the deaths of pilots. He was freed, his partner is still jailed, his boy is dead, and his second son appears to be romancing his partner’s daughter. Worst, his wife will not give up the idea that some day their older son will return. 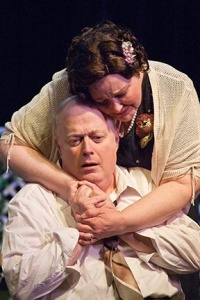 Richard Large and Candy Beck as Joe and Kate, the troubled couple central to “All My Sons”

Richard Large slides easily into the character of Joe, full of a friendly, but overly hearty bluster. As his troubled wife, Kate, Candy Beck hits just the right balance between motherliness and deep, abiding sadness. Justin Patrick Murphy shines as the stalwart and straightforward Chris, the younger brother – a seeker in his own right, torn between his parents’ legacy and his love for his girl.

As the equally torn love interest, Ann, Alexandra Ozeri moves with the appropriate combination of nervousness and excitement. Unfortunately, her understanding of vocal projection leads her to make her voice very shrill. This makes her a bit less sympathetic and a bit harder to listen to as the show progresses.

Norman Dostal makes a brief but vibratingly emotional appearance as Ann’s lawyer brother, fresh from a visit to their imprisoned father. Todd Rew has several very telling moments as the young and idealistic doctor. Shannon Fuller balances him well as his extremely practical, moderately bitter wife. Ernie Rivera and Casey Morlet have fun as the somewhat blissful and innocent young couple down the street, while John Noah Molina supplies the neighborhood kid Joe encourages to be law-abiding to a fault.

Director Roxanne Barker has a real feel for this kind of material. She keeps the pace flowing and gives the characters enough to do to keep the whole thing from devolving into a debate. The set, by Suzanne Frederickson, evokes the kind of Midwestern yard and house which create the normalcy in this disquieting tale. Karen Jacobson handles the props and costumes, and opts either for the vaguely or specifically period, though one wonders why almost all the men’s pants are a bit short.

Still, this is a lively production – particularly polished for a community group. The group itself is worth mentioning. As they barrel through their 91st season they are probably the oldest continuously operating theatrical company in the greater Los Angeles area. That’s worthy of note, all by itself.

Review All My Sons, Arthur Miller, community theater company, Roxanne Barker, Whittier Community Theatre
← The Ones Who Live: Revisiting “The Grapes of Wrath” at A Noise Within Peeling the Layers of “Tribes” at the Taper →