Peeling the Layers of “Tribes” at the Taper

Leave a comment Posted by Frances Baum Nicholson on March 22, 2013 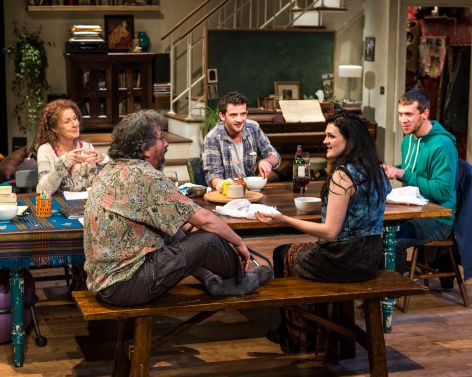 Lee Roy Rogers, Jeff Still, Will Brill, Gayle Rankin and Russell Harvard create a family of noise and silences in “Tribes” at the Mark Taper Forum

One of the great delights of experiencing fine playwriting is the discovery of the many layers within a seemingly straightforward plot. There is, of course, a reasonably compelling story, but underneath it are individual characters and relationships which create complex and far more universal statements about society or individuals within that society. Such a play is Nina Raine’s “Tribes,” currently at the Mark Taper Forum.

In its most obvious form, “Tribes” is about a rather esoteric and bohemian British family – father, mother, two sons and a daughter. One of the sons, Billy, was born deaf, and has been taught to lip-read so as to maintain his connection with his family and the larger world. Indeed, Billy’s father is adamant that learning to sign instead would have limited Billy to a subculture.

Still, there is a lot Billy doesn’t catch in the whirlwind of conversation which swirls about this family circle. This he discovers for himself, when he meets and falls for Sylvia, a girl from a deaf family – now losing her hearing herself – who can and does use ASL (American Sign Language). 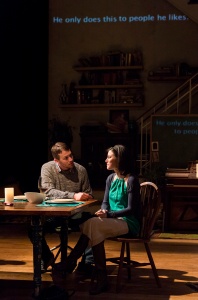 But on another level, this is about resistance to difference, and the ways in which those who can hear can still use that resistance to remain deaf to the truth of the people around them. As these themes develop, intersect and even entwine, the play becomes more and more compelling, and more and more artistically satisfying.

This, in great measure, because it is so well played, and directed with such an innate sense of the play’s purpose, and of how to bring conversations we as audience cannot hear into the forefront of our understanding.

Russell Harvard is deaf himself, and plays to his own as well as his character’s truths: underscoring all that Billy has done to adapt to what he can access in order to function in his world, and bringing to his use of ASL a visual glee. As Billy’s rather myopic but bombastic father, Jeff Still maintains the intensity of a character of great sureness and volume, and profoundly warped accuracy.

Will Brill creates the increasingly panicked, fragile brother, while Gayle Rankin settles into the role of the underimpressive sister. Lee Roy Rogers, as the woman who gives as much ballast as any one person can to this roiling family, makes the mother a woman with her own blinders, while Susan Pourfar helps to define the dignity and ambiguity of difference with a passion which ties the rest together.

Director David Cromer choreographs this complex human knot so that all parts are embraceable. Scott Pask’s porous scenic design creates not only settings, but the surfaces necessary for the obligatory projections – superscripts which tell a hearing audience what those speaking ASL are saying.

In short, even on a more surface level, “Tribes” has much to say about the necessity of expression, and the importance of “listening” fully, whether with one’s ears or one’s eyes, to those one is close to. Take the time to absorb this, and peel the layers as you go. It will definitely be worth the concentration.

Review David Cromer, Mark Taper Forum, Nina Raine, Russell Harvard, Tribes
← “All My Sons” in Whittier: Community theater tackles a classic The Queen of Rock, Roots and All: “One Night with Janis Joplin” at Pasadena Playhouse →