Of Death and Stones: “Eurydice” at A Noise Within

Leave a comment Posted by Frances Baum Nicholson on March 23, 2013 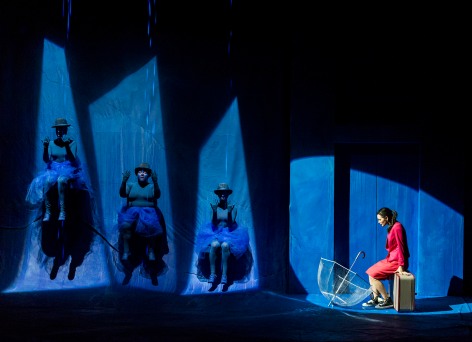 L to R: Kelly Ehlert, Abigail Marks, Jessie Losch, and Jules Willcox in “Eurydice” at A Noise Within

I have always had a problem with the story of Orpheus and Eurydice, for many reasons. I am not alone in this. Take, as example, British poet laureate Carol Ann Duffy, who examines a number of myths and historical figures from a female perspective in her book “The World’s Wife.” Her Eurydice, who really has no interest in returning to the world of the living, finally figures out how to stop Orpheus from leading her into daylight by appealing to his ego: “My voice shook when I spoke – Orpheus, your poem’s a masterpiece. I’d love to hear it again…”

This idea of a Eurydice in control of her own fate also appears in Sarah Ruhl’s adaptation of the classic myth, simply titled “Eurydice.” Now at A Noise Within, it uses the myth to look at the whole nature of death. Unlike, say, Thornton Wilder’s version of the dead, where they gradually detach from earth while waiting for something eternal to come out, the death of Ruhl’s Hades is a more sudden divorce from the living: language and human connection gone in an instant. Only Eurydice and the father who never knew her manage to avoid this oblivion – much to the disquiet of the stones who watch over it all.

In flashback and reverie we see how it all came about: the conventionality of a wedding which made the rather geeky Orpheus change from something intriguing to something mundane, the curious lure of danger which leads Eurydice to her death, the holding on past one’s own time which makes Orpheus’ quest unfortunate.

In director Geoff Elliott’s hands, this reverie becomes perhaps overly quiet. Indeed, with the exception of moments when the stones – who act as Greek chorus – take over, the entire enterprise seems dreamy to the point of simply being slow. Some of this may come from Elliott being in the show he’s directing. It’s hard in such a “think piece” not to have an observer help pace the thing.

Jules Willcox’s Eurydice vibrates with intelligence, a certain amount of naivete and a curiosity tinged with resistance. Graham Sibley’s overt enthusiasm and nerdish passion make him the milquetoast to her vinegar: a combination virtually guaranteed not to work. Ryan Vincent Anderson represents everything interesting in the “Nasty Interesting Man” who later turns out to be Hades himself, luring Eurydice away from her own wedding and into the underworld. Elliott plays Eurydice’s father – a man of conventional dreams saddened to be able to see his daughter grow up only from the distance of the dead. 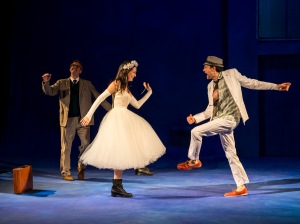 Jules Willcox, as Eurydice, and Graham Sibley as Orpheus, dance at their wedding while Geoff Elliott looks on [photos by Craig Schwartz]

Still, all of this would be comparatively bland were it not for Abigail Marks, Jessie Losch and Kelly Ehlert, as the stones. Their concerted reactions to the action, and their constant critical commentary proves delightful, and provides most of the memorable moments in the play. For one thing, their choreography in movement and speech have a sharp, crisp quality missing from just about everything else. And they are very funny, very often.

So, essentially, with the exception of “stone moments,” this “Eurydice” has its intriguing elements, but they don’t win. In attempting a sort of otherworldly, velvet quality, the show seems to creep along. Kudos go to Brian Gale for fascinating projections which take us from setting to setting with ease, and to scenic designer Jeanine A. Ringer, if for nothing else than figuring out how to contain rain in an elevator.

If this sounds interesting, go take a look. “Eurydice” is playing in repertory with their astonishing production of “The Grapes of Wrath”. Perhaps the contrast to that beautifully paced production is part of the problem.

Review A Noise Within, Abigail Marks, Eurydice, Geoff Elliott, Graham Sibley, Jessie Losch, Jules Willcox, Kelly Ehlert, Ryan Vincent Anderson, Susan Ruhl
← The Queen of Rock, Roots and All: “One Night with Janis Joplin” at Pasadena Playhouse On a Star Dying Old, Too Young: “End of the Rainbow” at the Ahmanson →