A Puzzle Worth Working On: “A Parallelogram” at the Mark Taper Forum

Leave a comment Posted by Frances Baum Nicholson on July 24, 2013 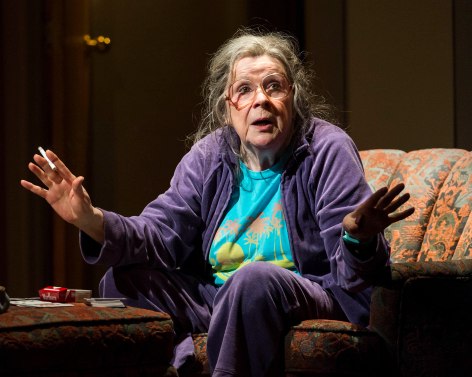 Marylouise Burke explains the future in “A Parallelogram” at the Mark Taper Forum [photo: Craig Schwartz]

It’s a provocative question, asked early in Bruce Norris’ play, “A Parallelogram,” now at the Mark Taper Forum. The central character posits “If you know in advance exactly what was going to happen in your life, and how everything was going to turn out, and if you knew you couldn’t do anything to change it, would you still go on with your life?” Once again, the author who won a Pulitzer Prize for his controversial “Clybourne Park” is making an audience pay close attention, laugh from the gut, and ponder.

Under the direction of Anna D. Shapiro, “A Parallelogram” is fantasy, philosophy, and perhaps troubling truth, peopled with characters you genuinely want to know, struggling with huge questions beyond their ability to process. And it is funny – very – at just the moments when it would otherwise be scary as can be.

Bee is living with Jay, a man who left his wife and kids to be with her. On one normal afternoon, while Jay fusses at her and watches a ball game, while the gardener we will soon know as JJ mows the lawn, Bee discovers she can be in conversation with her future self. Or is it that Bee 2, older and complacently dumpy, uses an elaborate remote control to talk to her earlier self? Or is something else going on?

Regardless of the eventual answers an audience may make to those questions, the younger Bee begins to seem pretty demented as she starts predicting the future based on her otherwise unheard conversations. The dialogue with her future self takes over her life. But then, perhaps that was always going to happen. Or, perhaps, the older self she’s talking to isn’t really there. All things are possible.

The play is beautifully crafted. Shapiro’s crisp and innovative direction enhances that fact, aided tremendously by Todd Rosenthal’s extraordinarily facile set. A near-perfect cast takes its rather normal characters down an extraordinary rabbit hole, and the audience proves more than happy to follow. 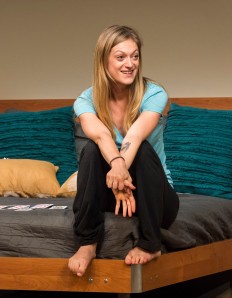 Marin Ireland in “A Parallelogram”

Marin Ireland manages to make Bee seem as logical and practical as the next person – perhaps even more so – and endearing at the tensest moments. The wrestlings with logic amidst the fantastical nature of the entire proceeding, makes this straightforward attitude essential, and her warmth makes the audience care. As the boyfriend who must come to terms with the oddity of his girlfriend’s new behavior, Tom Irwin becomes the essential angst-filled but loving middle-aged man, who cannot help but question his life decisions as this tale unfolds. Most impressive are his frighteningly even “rewind” moments, duplicating his own actions over and over with convincing sameness of tone and movement.

Carlo Alban, as JJ, the gardener who provides a window on practical poverty and elemental relationship, manages to create a character of limited intellectual scope without turning the character into a stereotype. And, best of all, Marylouise Burke is absolutely riveting – funny, flip, intense and fatalistic – as the older Bee, apparently controlling access to and commenting on every action her younger self makes in the world. She commands the stage, and her part and her portrayal make the show the charismatic piece it is.

There are moments in “A Parallelogram” which remind one just slightly of Thornton Wilder’s “The Skin of Our Teeth,” both in terms of narrator and in terms of the circular nature of the tale. That’s not a bad thing, as both plays highlight the intellect of the audience, in part by making them laugh. And, though this show will definitely work the intellect, it is very, very funny. Still, calling it a comedy, or using words like “hysterical,” would miss the rather huge point about humanity it is also making.

Catch this play while you can. The concept is intriguing, the performances are highly engaging, the questions one is left with will keep the brain busy for days, and the points it makes may cause a certain amount of personal reevaluation. Not bad for a couple of hours in the theater.