Cutting out the Clutter: “R II” reimagines one of Shakespeare’s hidden treasures

Leave a comment Posted by Frances Baum Nicholson on September 22, 2013 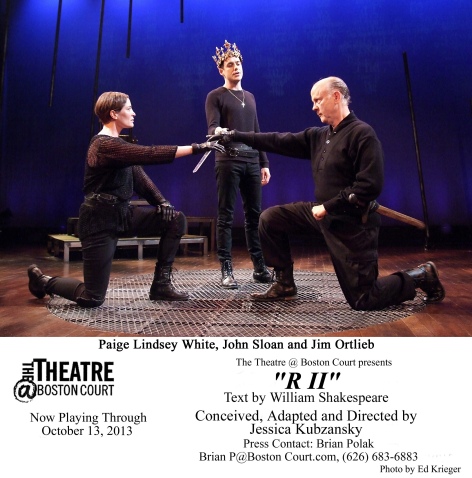 The cast of “R II” at Boston Court

This production has been extended through October 27, 2013

As I – and many others – so often say, one of the most fascinating things about seeing new productions of Shakespeare’s plays comes from the very familiarity of the works themselves. Directors do not feel, as a rather staid British friend once claimed, that all the Bard’s plays must be performed in doublet and hose. Far from it. Doing Shakespeare is a license to be extraordinarily creative. His works’ longevity, in truth, comes largely from three things which transcend time: complex characters, universally human themes, and rich, gorgeous, profoundly expressive language. These are elements one can gleefully, well, play with.

Which brings me to the much-honored Jessica Kubzansky, co-artistic director of The Theatre at Boston Court in Pasadena, and self-proclaimed Shakespeare freak. In love with the comparatively obscure history play, “Richard II” – a fount of rich, introspective poetry on the subject of increasing self-awareness – she decided to rework the thing. By losing the host of extraneous historical personages, she has honed the play down to the meat of the tale: a man left immature and selfish by his upbringing who is brought to full understanding of adulthood by the disaster his acts bring upon himself.

And thus, “R II”. Kubzansky has reedited the play into a series of flashbacks, as the doomed Richard ponders his fate and what brought him there. And she has honed the cast of 33 named persons and assorted underlings down to three individuals. One plays Richard. The other two play the 12 other people essential to the plot. Some necessary dialogue from others has been handed to the 12, some to Richard. Stripped of its finery and its crowds, this intimate piece becomes an extraordinary celebration of those very things mentioned above: character, humanity, and articulate speech.

Then she has set the thing in Kaitlyn Pietras’ minimalist, yet surprisingly evocative set, with projections of essential lines of dialogue occasionally pounding the back of the room as sound designer John Zalewski’s whispering crowds mutter in your ear. Jenny Foldenauer’s all-purpose black costumes, festooned now and again with just enough to create individual personages, allow for quick character shifts and – as does everything else – divorces the audience from the drapery and pomp of an ordinary production of one of the history plays. All attention is therefore on the essentials: the king.

John Sloan creates a Richard who shifts over the course of the production from callow youth to an achingly doomed wisdom, yet remains essentially ordinary – less than imposing even in an ornate crown. He is never really offstage during the entire two hours or so of the production, and his commanding use of Shakespearean dialogue in the process of Richard’s gradual metamorphosis keeps the show alive.

Paige Lindsey White, playing five parts but most particularly Richard’s nemesis Henry of Bolingbroke, and Richard’s Queen Isabel, commands varieties of body language and vocal tone to shift us from character to character with a conviction which carries the audience with her quite seamlessly. Beyond that, she manages to imbue these very differing people with their own rounded passions, drives and griefs. Fascinating to watch.

Likewise Jim Ortlieb is called upon to create a total of seven persons, all of whom are fairly elemental to the storyline. Ortlieb is at his best when operating outside Richard’s family circle, either as Thomas Mowbray startled at the king’s double-dealing, as the fascinatingly spun John Bushy whose portrayal colors the entire production, or the Bishop of Carlisle stuck between history and doctrine. On the other hand, perhaps the one weakness of this startlingly good production (and it is more an issue with the script than this performer) comes as Ortlieb is asked to keep various of Richard’s kin separate, all of whom come from the same rank, concern, and general attitude.

Still, that takes little away from “R II.” The poetry – some of Shakespeare’s best – is retained. I admit Richard’s speech in defeat, “let us sit upon the ground and tell sad stories of the death of kings…” is one of my favorite, if one of the gentlest of the Bard’s poetic lines. Here it stands out more than usual because of the focus on Richard alone. If Shakespeare intrigues you, and particularly if you have never met “Richard II” onstage, this is one to see.