It’s a Pickle of a Life: “Humor Abuse” at the Taper

Leave a comment Posted by Frances Baum Nicholson on September 30, 2013

The son plays the father and the puppet plays the son in “Humor Abuse” [photo: Craig Schwartz]

One of the small surprises of my rather standard suburban upbringing was my mother’s passionate love for the circus. She took us every time Ringling Brothers came to town, appreciating most the lion tamers and the clowns. Indeed, somewhere we have a picture of the 5-year-old me hugging and being hugged by Emmett Kelly, the original Weary Willie hobo clown. As she explained to me early on, clowns have to be better acrobats than the acrobats. They not only have to do the same tricks, they have to know how to do them badly, the same way every time, without getting hurt.

If there was any doubt of this – and of the unique world in which circus people live and work – it will be dispelled by seeing “Humor Abuse,” now at the Mark Taper Forum. Here, Lorenzo Pizoni, who grew up in The Pickle Family Circus founded by his former San Francisco street performer parents, tells the story of that life and his tempestuous relationship with his father. In the process he performs several of his father’s clown routines, as well as the acts he created for himself. Written by Pizoni and college friend and playwright Erica Schmidt (who also directs) it inspires laughs, sighs, and a deep appreciation for both his unique background and his resilience in the midst of constant change. 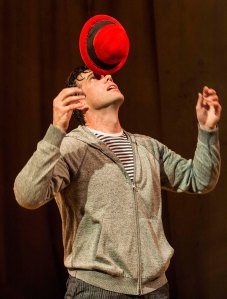 The central thing you will remember, other than wonderful, sometimes slapstick, sometimes subtle physical humor, is that resilience. Indeed, such things as learning how to fall down stairs and from the tops of ladders, not to mention the discussions of his father’s many injuries (and by extrapolation, perhaps his own) lead to the image of someone whose love for the craft was balanced by a serious determination to define himself – a definition which eventually took him beyond the circus world.

Yet, the tale itself isn’t grim – even when things were darkest. There is consistently a humorous undertone. Touching scenes such as the use of the puppet version of himself that his father used in some of his bits, or the little red hat his mother made specifically to be good for hat tricks are balanced by sheer gleeful craziness: his weird green, ducklike character trying to climb a ladder in skin diver’s flippers, or a bellhop trying to carry too many suitcases upstairs.

Taken all in all, “Humor Abuse” provides one of the most uniformly entertaining evenings I’ve had in the theater in a long time. Perhaps that comes from my inherited love of clowns (don’t worry – no face paint with these ones – just the occasional red nose). Or, given the deep, chesty laughs coming from those around me, perhaps that is because, despite his more recent career as a legitimate actor, Lorenzo Pizoni is essentially very, very good at making people laugh. And that is, as my mother always said, quite a gift to give the world.

Performed without an intermission, it will startle you to discover the show is over. The time passes so quickly.

Review
← The Lion in Winter in small: a great play on the small stage Simple Delights: “The 25th Annual Putnam County Spelling Bee” in Covina →