The Lion in Winter in small: a great play on the small stage

Leave a comment Posted by Frances Baum Nicholson on September 30, 2013 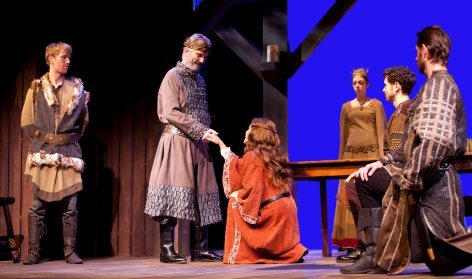 The cast of The Lion in Winter at Sierra Madre Playhouse in a moment of tension [photo: Gina Long]

James Goldman plays and screenplays have a reputation for being talky. But what elegant talk! Take, as example, one of his best-known works, “The Lion in Winter.” Oscar-winning in film form, it does even better on the stage, where a slight claustrophobia adds to the tension of one dysfunctional royal family sequestered in a castle trying to sort out little details like succession. This particularly when we know, or think we know, many of the family members from legend and ballad.

In the new production at the Sierra Madre Playhouse, the smaller stage emphasizes this sense of captivity, enhanced as it is by Gary Wissman’s versatile, representational set. There, director Michael Cooper has gathered a cast ranging from good to very good indeed, all of whom live the characters they wear.

The story follows a gathering of English King Henry II’s family – three sons including Richard the Lionheart, the John who would one day be forced to sign the Magna Carta, and the middle son Geoffrey, a clever schemer whose fate was to never sit on a throne. They are there with the boys’ mother, the legendary Eleanor of Aquitaine, whom Henry has kept locked in a castle for years, Henry’s current mistress Alais, a French princess sent at a young age to be raised in the English court, and Alais’ brother Philip, recently become the King of France.

Philip wants Alais to either marry one of the sons, or for Henry to return her dowry. Eleanor wants Henry to certify Richard as his successor. Henry wants John instead. It becomes part political game, part tossing of threats, and part intellectual exercise. This, in a storm of articulate, memorable, quotable dialogue.

Adam Burch captures the determinedly solid warrior that is Richard. Clay Bunker gives Geoffrey the requisite wise-but-sneaky quality which makes him occasionally play chess with his brothers’ lives. James Weeks gives young John just enough of the spoiled and juvenile brat to make him irritating to everyone but his father. Macleish Day radiates youth and sensuality more than intellectual brilliance but makes that work as Philip. Alison Lani’s Alais stands back and analyses her status as political pawn, in balance with her simpler, explicit love for Henry, the man. All these characters work together beautifully to create the world in which the two towering characters must sling their arrows.

John Rafter Lee, at least from the waist up, makes a fine Henry – large and commanding, gentle and practical and deeply wounded by turns. If only he would pace and rock less, and stop shuffling his feet in a most unkinglike manner. As his combatant, equal, and wife, Diane Hurley makes increasingly fine work of Eleanor, finding the strength and intellectual power without ever becoming (as one has to be tempted to become) any kind of echo of Katharine Hepburn’s Oscar-winning portrait. It’s a strong performance.

The direction is tight, and the ensemble strong. Indeed, the only thing which tends to pull one back are Carlos Brown’s costumes. Fine on the women, several of the men’s costumes are poorly constructed, pooching out in distracting ways, unevenly sewn, and certainly not the kind of wear a king would put on.

Still, that aside, this is a good play given a reasonably fine airing. That delightful moment when Eleanor says to herself, in the midst of total upheaval, “What family doesn’t have its ups and downs?” gets just as much a laugh as ever. Indeed, this production finds the humor where it lives, and revels – as the play should – in the sheer, ferocious intelligence of its two central protagonists. Henry and Eleanor remain entertained by and appreciative of the superior intellects they use against each other. Dysfunctional they may be and ostensibly yearning for peace, but calm isn’t everything.