Deep Laughter: The Sunshine Boys at the Ahmanson

Leave a comment Posted by Frances Baum Nicholson on October 8, 2013 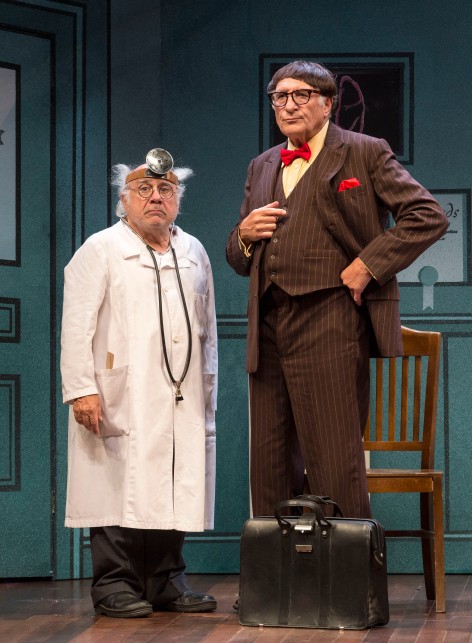 Danny DeVito and Judd Hirsch reunite in “The Sunshine Boys” at the Ahmanson [photo: Craig Schwartz]

One thing perhaps most interesting in wandering through Neil Simon’s remarkable career as a playwright has to do with the increasing sophistication of his plays. Originally, he wrote sweet human comedies, but even as he brought his talents to a wider range of human conditions, the humor remained underneath. Indeed, what keeps what are essentially dramas from being tragedies – in Simon’s hands – is the inevitable tension-breaking quip, or ironic sigh, which lightens the burden.

One is reminded powerfully of this very thing when watching one of his finest, “The Sunshine Boys,” at the Ahmanson Theatre. Most certainly, the small cast is just about perfect: a nostalgic reunion of comedic favorites in a play about the potential reunion of comedic favorites. The crisp direction, the evocative set, and those ever-present, tension-lifting quips which keep a tale of diminishment and bitterness from being maudlin, make for something most enjoyable to watch.

Central to the piece are Danny DeVito and Judd Hirsch as Willie Clark and Al Lewis – The Sunshine Boys – longtime vaudeville stars estranged for over a decade, and facing the struggles of advancing age. Now Willie’s nephew, reluctant guardian and agent has been approached about a TV special honoring giants of comedy. Can the Willie and Al do it? Will they? Can they still be funny after years of not speaking to each other?

DeVito has all the snappy quips and slightly crazed but diminishing aspects of a longtime professional clown losing definition. Hirsch’s grumbling, faded gentility offers immediate contrast to the scruffy intensity of his counterpart. Indeed, this defines unspoken elements of their relationship’s failure – an aspect Simon often explores in his work.

Backing up these two legends are Justin Bartha as the nephew losing his patience and his tolerance, and Johnnie Fiori as the nurse who has Willie’s number, as she looks after him late in the play. Also important are those who assist in filming the best known Clark and Lewis sketch, Matthew Bohrer as the intently patient television production assistant, Annie Abrams as a “nurse” right out of burlesque, and Gibby Brand as the fictional patient who becomes the butt of some of the best of the sketch’s jokes. Frank Kopyc’s voice adds to the silliness as the offstage television director.

Director Thea Sharrock has both honored the material and the quality of her actors as she emphasizes the more nuanced aspects of Simon’s characters. This is greatly enhanced by Hildegard Bechtler’s precise and evocative set, and appropriately disparate costumes. As a production, the details show particular care.

“The Sunshine Boys” are cantankerous and impossible. Yet they are also very human, and in exploring the failure of a partnership in some ways more intimate than a marriage, it offers a window – no matter how humorous on occasion – into the breakdown of all relationships. And that, in the end, is Simon’s greatest gift: make us laugh even as we see the grief the human race can bring to itself, one person at a time.