A New Place Where Dreams Are Born? “Peter and the Starcatcher” flies into the Ahmanson

Leave a comment Posted by Frances Baum Nicholson on December 7, 2013 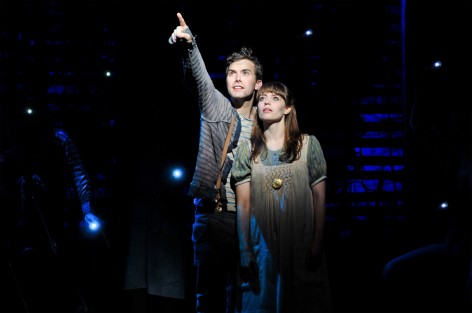 Sometimes when one mixes authors and genres to produce something for the stage it can look just like that sounds: a hodgepodge. On the other hand, sometimes the result is much more than the sum of its parts.

One way or another, that can be said of “Peter and the Starcatcher,” now at the Ahmanson Theatre in Los Angeles. Playwright Rick Elice has taken a children’s book and a children’s story and smashed them together into a play which, though fanciful, is not really for children. Directors Roger Rees and Alex Timbers have taken that play and staged it in a mash-up of English panto, Monty Python-esque British humor, and story theater. The results are funny, charming, clever and wistful.

The base of the plot is the book of the same name by Dave Barry and Ridley Pearson, which provides a prequel to “Peter Pan”. To this has been added significant nods to J.M. Barrie’s famed original tale of Peter.

It concerns the trials of Lord Aster, an English ambassador, and his daughter Molly. He is sent to the island of Rangoon with a chest of the Queen’s treasure. Molly and her governess are sent on a different ship, by a different route, to the same destination with a similar chest. On that second ship are a group of orphans destined for slave labor in Rangoon, led by a nameless boy who eventually names himself Peter. There are pirates and danger and magic galore, an island, a crocodile, and all the explanations needed for how Lost Boys ended up in Neverland.

All of this is told as story theater tells things: minimal set, a few props adapted over and over to become places, tools and dramatic effects, and a cast which – for the most part – covers a host of differing characters in the telling of the tale. It’s a hoot – silly, clever and just a bit bizarre. At least one women’s part is played by a man, in true panto format. Everything has a slightly salacious undertone and its tongue stuck firmly in its cheek, all of which adds to the comedy. 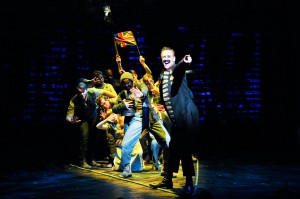 Of course, for all of this to work one must have a versatile and able cast, and this production definitely does. Among a well-tuned ensemble, standouts include Joey deBettencourt as the boy who will be Peter, Megan Stern as the direct and logical Molly, John Sanders having oversized fun in a Groucho Marx mustache as Black Stache the pirate, and Benjamin Schrader delightfully outrageous as the nanny Mrs. Bumbrake. Also particularly fine are Nathan Hosner’s turn as the disciplined British diplomat Aster and Lee Zarrett as Fighting Prawn, the ruler of the island they encounter.

Still, it is the style and the staging which make the show. Nearly everything in Donyale Werle’s set and among Paloma Young’s costumes are repurposed articles, helped and celebrated by Broadway Green Alliance, and one reason the show won Tonys for them both. This use of recycling meets an impressive, and belly laugh-inducing height during the mermaid sequence which begins the second act, and in the entire sequence with the crocodile. That creature’s “image” must be seen to be believed.

Again, it must be said that this show is not for kids, at least younger or less sophisticated ones. Also it must be approached in the appropriate spirit. It was sad to see people leave at intermission (before some of the funniest bits) because it was too silly or too hard to follow. This show’s unabashed ridiculousness is the same kind of humor which has endeared Monty Python to generations, and turned English panto into a national treasure. You must come with that sense, and with a willingness to suspend all disbelief, to have the fun everyone should have at this production.

“Peter and the Starcatcher” won five Tonys for a reason. It does what it does very well indeed. So come for a laugh, and a lighthearted new view of the Peter Pan most have known since childhood. As long as you expect the unexpected, and are willing to play along, you’ll have a unique, and uniquely refreshing holiday treat.