Leave a comment Posted by Frances Baum Nicholson on February 10, 2014 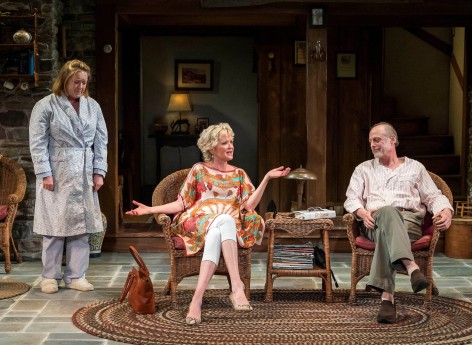 Christopher Durang’s plays have always been remarkable for their unique combination of wry humor, human insight and respect for the craft of theater itself – the things you can do with a play you can’t as easily do in any other medium. He also makes fun of his own genre with as much artfulness as is possible to mount, which I first encountered in the 1981 one-act “An Actor’s Nightmare”, and now in his terrifically funny, Tony-winning send-up of Anton Chekhov, “Vanya and Sonia and Masha and Spike.”

Now at the Mark Taper Forum, “Vanya and Sonia and Masha and Spike” smashes together the most telling elements from any number of Chekhovian works, and transplants it to the modern U.S., where it all begins to appear fairly ridiculous. In the process, the play makes fun of the film industry, bad writing, Disney, and any number of other things, ending up so full of cultural references that they alone makes the show roaringly comical. For the Chekhov aficionado, and I admit to being one, the production actually is (and usually I hate using this term, as it is so often misapplied) absolutely hysterical at times.

Vanya, Sonia and Masha are the now-aging children of college professors who named them after Chekhovian characters. While Masha has been off becoming a famed film star, Vanya and Sonia have stayed behind in their Bucks County home. There they nursed their parents through their final years, but then ended up staying on unsure of how to proceed. Now, Sonia reflects on her empty life and her status as the adopted child, making an occupation out of negativism and despair. Vanya quietly longs for companionship, and mourns the treasures of youth. 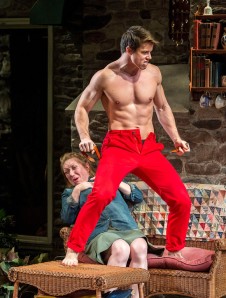 Then Masha comes home for a rare visit, trailing a dim, physically gorgeous young aspiring actor names Spike in her wake. He, in turn, meets the girl visiting next door: Nina, the very young, would-be actress who idolizes Masha even as Masha sees her as a threat. All the while, the cleaning woman, Cassandra, offers up messages of foreboding, in a crazed mix of ancient Greek, voodoo, modern television references and observational wisdom.

And that doesn’t tell you the half of it. Mark Blum’s Vanya has the wistful yearnings of his namesake, a calm which ties the piece together some, and then utters a most delightfully out-of-control Russian-style harangue against modern society with a rich and memorable passion. One will never look at postage stamps, a repeated reference, quite the same way again. Kristine Nielsen proves absolutely brilliant as the morose Sonia, turning her melancholy on and off like a switch, and at one critical point offering up the best Maggie Smith imitation you can imagine – by itself fall-down funny.

Director David Hyde Pierce builds upon the original direction of Nicholas Martin with the expectedly sure sense of comic timing and contrast. The beautiful coordination of all these very recognizable characters into a single whole which neither neglects the subtle comic nudges nor overdoes a one of them is a wondrous thing in itself. David Korins’ set design creates a very real space for these characters to cling. Costume designer Gabriel Berry gets a special nod for creating exactly the right costume-party costumes at a pivotal moment in the storyline.

Indeed, what proves most lovely and relaxing about “Vanya and Sonia and Masha and Spike” has to be the sheer quality of every aspect of the thing. Acting, writing, directing, and every visual component work together to create a single moment of intelligent wit, filled with satisfying surprises and a few bits of ardent social commentary. In the midst of the upheavals of daily existence, I cannot think of a better way to spend a couple of hours.