Subtle and Stunning: “Come Back, Little Sheba” renewed at A Noise Within

Leave a comment Posted by Frances Baum Nicholson on April 6, 2014 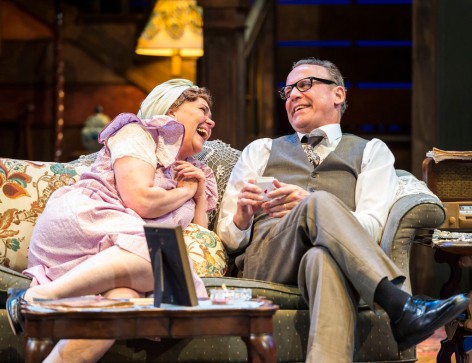 Deborah Strang and Geoff Elliott as Lola and Doc in the fine A Noise Within production of Come Back, Little Sheba [photo: Craig Schwartz]

For some, William Inge’s “Come Back, Little Sheba” is from another time – close enough to be discomforting but not close enough to be relevant. I might have believed so too, except for a wise and understated performance of the work just opened at A Noise Within. There, the time frame has the same impact as the set: it simply provides a place where troubled, very human characters can exist. Those characters themselves, in the hands of a strong and insightful cast, prove timeless in their very humanity. All at once, this play is not a dinosaur, but a window on the human soul. And, quite unlike the more familiar renditions, there is a quiet knot of hope in there somewhere.

The tale is, for some, a familiar one. Doc and Lola live in a small house somewhere in the midwest. He is a chiropractor, having had to give up a promising medical education when Lola became pregnant. They then lost the baby. Now Lola, heavy and stupefyingly lonely, grasps at anyone who walks in the door as a source of conversation. Doc, after a long bout of drunkenness, has been in AA for almost a year and is deeply proud of his own self control. Yet this is powered by an inability to look back – in conflict with Lola’s longing for her popular and coquettish youth.

Into this world has come a boarder: a young college student named Marie. She brings a sweetness, but a generational shift: holding a useful, handsome but somewhat vapid boyfriend intimately close even as she is engaged to a rising young businessman back in her home town. For Lola, she is a lovely reminder of her own days of popularity. For Doc, she is a reminder of his youth, and the purity he lost. What will happen if he finds out she isn’t the sweet, pure thing he believes her to be?

The internal struggles of Lola and Doc power the piece. Though not much happens to change them in the script itself, it is up to the actors to find the subtle adjustments which come from wrestling with boredom and demons and a shifting world. This task is left to Deborah Strang, whose portraits are always an intellectual and emotional treat, and Geoff Elliott in perhaps the most underplayed and cerebral turn of his in recent memory. Between them they keep the play fascinating.

Along with these two, Lili Fuller makes a sweet-faced, but calculating Marie, Miles Gaston Villanueva’s jock of a boyfriend manages to be rather narcissistic and detached from seriousness without devolving into stereotype, and in a brief appearance Paul Culos gives the out-of-town fiancé the aura of success and single-mindedness without the snobby elitism which sometimes colors the character. Mitchell Edmonds makes Doc’s AA sponsor a warm, determined and practical guy, while John Klopping has a lovely time as the earnest young milkman flattered by Lola’s interest in his self-improvement. Jill Hill makes lovely work of the neighbor woman, whose shift in tone and attitude seem natural and heartfelt.

Pulled together by director Elliott and co-director Julia Rodriguez-Elliott, this “Come Back, Little Sheba” has a gentle rhythm, a terrific use of space, and – and I say it once again – an underplayed subtlety which makes the whole thing hum along. Dramatic moments mean something when everything else is not played at forte, and the opportunity to watch the internal wrestlings in, particularly, Strang’s face ends up telling so much more than if everything was rather overblown.

One must make a nod to Stephen Gifford’s representative set design, and to Leah Piehl’s solidly period costumes. They ground the play, as do the equally period props and furniture amassed by Kristina Teves.

As for the play itself, yes, the material is dated. How many middle-to-low income couples, even in the midwest, can afford to have the wife stay at home? How many pregnant girls these days face shotgun marriages? Our post-birth control pill age is far more apt to accept a variety of ethical models of behavior, and to consider the narrower views of sex in that generation to be fusty and unworkable. Still, those things are window-dressing in a work about struggle, identity and loneliness. That is the core of this classic play, at least in this production.

As a result, a treasure has been discovered where there might easily have been something less interesting. That is worth celebrating.