Leave a comment Posted by Frances Baum Nicholson on June 6, 2014 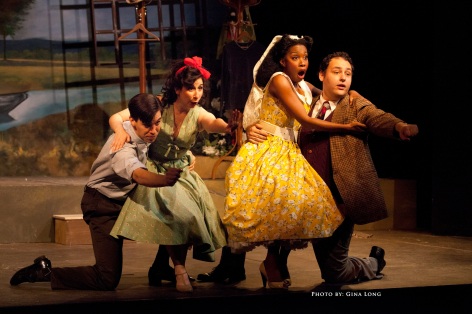 One of the great movements of the 20th century theater was a push to move classics of the stage out of their traditional boxes. This is, of course, most evident in the productions of Shakespeare, which was moved outside of the usual “doublet and hose” setting into all kinds of fabulous and/or symbolic situations. Such moves can make an old warhorse speak with new energy.

Indeed, even lighter works like those of W.S. Gilbert and Arthur Sullivan took well to being toyed with. This spelled the death knell of the D’Oyly Carte Opera Company, whose totally unchanged, Victorian stagings of their operettas began to seem dusty. But it also meant that new generations could find current connections to their comedy, and the political and social commentaries the operettas were grounded in. Which brings us to the production of Gilbert and Sullivan’s “The Gondoliers” at the Sierra Madre Playhouse.

Director and adaptor Alison Eliel-Kalmus has chosen to make the piece a play within a play, sort of, and to ground this silly tale in modern space. In her version, it is Coronation Day 1953, and most of London is madly celebrating the crowning of a new, young and vibrant queen. A group of actors must leave the general merry-making for a run-through of “The Gondoliers” prior to traipsing off to perform in Brighton – where their sets and costumes have already been sent. So, in an empty space, using whatever theatrical flotsam they can, they sing through the show in their street clothes.

From a purely practical, financial sense, setting the show this way allows one to do away with colorful period costumes (it is supposed to take place in a fantasy-era Venice), and use whatever bits of scenery are to hand. And they do. The artistic advantage to be had from this is a focus on the music – some of Sullivan’s best – and on the comparatively caustic commentary on the class system and monarchy the tale contains.

As for the performance itself, in any Gilbert and Sullivan operetta the lyrics are key. Articulation is everything. Classically trained vocalists used to singing the great operas sometimes have problems with this differing view of the art form. This production is no exception, as the chorus and occasionally a central character get more involved with the lovely music than words it is not only vital to hear but understand in order to follow what’s going on. Still, though this is particularly annoying in the first half, it does improve in the second.

The story revolves around the future of the supposed kingdom of Barataria. The king has died in an insurrection, and his long-hidden son must replace him. The problem has several facets. First, The Grand Inquisitor of Spain removed the boy in infancy and placed him with a lowly Italian peasant to be raised as his son. Now, the peasant is gone and Giuseppe and Marco, raised as brothers, are gondoliers. No one can remember which is the foster son.

So, both gondoliers, who are essentially “republican,” and therefore anti-monarchy, move to Barataria, along with their wives, to take over command of the country. Then, of course, there is Casilda, the daughter of a Spanish duke, who was married to the late king’s son when both were infants. She has fallen for another, unaware she was married, and the gondoliers both have wives. What will happen?

Dan “DW” McCann and particularly Craig McEldowney make a lively pair of gondoliers, vocally up to the parts and entertainingly egalitarian in character. As their spouses, Jenna Augen has an almost Imogene Coca-style of comic silliness, while November Christine manages an earnest passion and richness of tone one could only wish was matched by enough vocal articulation to fully get her often entertaining lyrics. James Jaeger and Joy Weiser make much silliness of the Duke and Duchess of Plaza-Toro, while Kara Masek, as their daughter, sings beautifully when called upon – and that’s about all her part is called on to do.

Also worth noting are John Szura as the Inquisitor, Leslie Thompson as the new king’s foster mother – and the person who sorts out the puzzle of the piece, and John King, who makes much out of the Spanish servant Luiz – a man with his own secrets.

In short, though there are a few rough spots, and the characters Eliel-Kalmus has created sometimes blur a bit with the characters in the musical offering, this production is a good chance to hear one of Gilbert and Sullivan’s greatest musical treasures. Still, one wonders at the choice to set the piece in this particular time period, as the juxtaposition is a bit odd: actors celebrating the crowning of Queen Elizabeth II, then coming in to perform a piece about the ridiculousness of monarchy and the class structure. Then again, maybe that’s the point.