An Ode to Human Connection: “4,000 Miles” in Sierra Madre

Leave a comment Posted by Frances Baum Nicholson on October 2, 2014 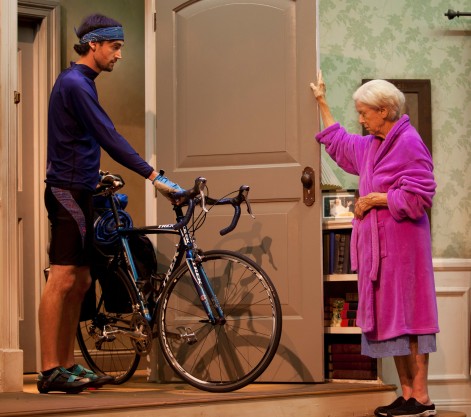 It is rare for a small, essentially community-based theater like Sierra Madre Playhouse to receive a chance for the Los Angeles premiere of a high profile play, but it has happened. Amy Herzog’s Pulitzer-nominated “4,000 Miles” has arrived at the small theater to much fanfare. The play, which looks at the interaction between an idealistic, somewhat immature young man who has bicycled across the country and the leftist grandmother he ends up staying with in New York City, offers a few statements on growth, on city vs small town activism, and on what the maturation process really means.

The tale starts with the arrival of Leo at the New York apartment in the middle of the night. Thrown by the rejection felt from the girlfriend he’d hoped to connect with (recently landed in NYC herself), he ends up staying with Vera, the wife of his late grandfather. As she teaches him focus and responsibility, he opens up about the horror of his cross-country bike journey, and gradually they both come to understand one another. It’s not that he will stay in the city, but perhaps now there is a link which will survive the distances.

Christian Prentice makes a great Leo – handsome if rough-hewn, overflowing with energy and opinion, slow to learn to listen. He makes a fine foil for Mimi Cozzens, as Vera, a woman used to being alone but gradually and increasingly glad of the comparatively non-standard company. Their best moment comes in a scene in which Leo introduces Vera to a bong, producing genuine laughter onstage and off.

Alexandra Wright makes fine work of Leo’s erstwhile girlfriend, displaying all the confident maturity and practicality he seems at first to be incapable of. In a brief, but very funny scene, Susane Lee has a great time with the Chinese-American girl Leo picks up one night, who cannot get over the fact Vera has “The Little Red Book of Chairman Mao” on display in her living room.

Director Christian Lebano has taken this rather talky play and given it as much legs as one can. John Vertrees’ beautiful set – complete with a background scene which got – and deserved – its own applause, makes a very realistic apartment for these folks to inhabit, though in some ways it becomes claustrophobic. But then, that may also be a point.

If there is any issue, it comes from Cozzens’ portrayal. Vera is to be occasionally forgetful, but Cozzens makes her, if anything, more so. Indeed, the hemming and hawing happens so often it begins to look less like the script and more like an actress struggling for lines. This is too bad, as the best moments are rich and filled with a special kind of wisdom and fatalism which comes with intelligent aging.

Still, “4,000 Miles” has a lot to say about adaptation, maturing, and the conflicting agendas of various generations. It’s worth a look as a picture of one corner of the American landscape. That is what made the Pulitzer folk take a close look. One note: the play is not recommended by the theater for children under 16, due to adult language and situations