Quick and Silly: “The Pied Piper of Hamlin” from Parson’s Nose Productions 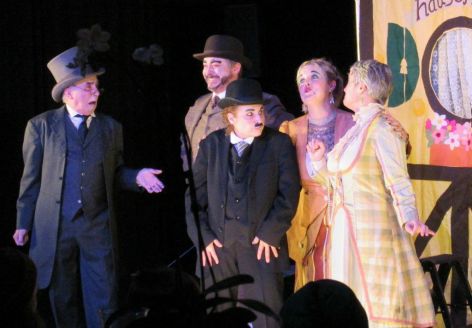 Note: I was given incorrect information. This show is DEFINITELY for children, and should not have been listed as only for people 12 and up, but rather 8 and up. Please bring kids. They’ll have a ball.

The Parson’s Nose Productions theater company has a unique, and admirable, vision. Founded 15 years ago to bring live theater in palatable bits to those who have never been exposed to the classics, it has performed its condensed, minimalist versions of everything from Shakespeare to folk tales in many different venues, always with the purpose of sparking interest in the theatrical medium, not only for potential performers, but for the growth and nurture of an audience.

Their latest venture, and first “full production” (as opposed to staged reading) this season is an in-house musical adaptation of “The Pied Piper of Hamlin.” Creative, silly, and filled with action and movement, it is certain to charm children, and appeal to the adults who bring them as well.

In this rendition, Hamlin is famous for cheese-making, and the two families vying for prominence as the finest of the cheese makers are the Klutzes and the Butzes. As they concentrate on their competition, and on the acquisition of those items which will display their wealth, they neglect their town and their children. The rats come to eat the cheese bits lying about. The children look for something beyond their parents’ materialism.

Which makes this all sound much more serious than it is. The very juxtaposition of an obvious message and innate silliness makes the show work. The music – innocuous though not memorable – allows for enough song and dance to keep the show limber. The performers, some of whom are called upon to play several parts, do so with an enthusiasm and crisp pacing. The hour-long performance flashes by.

James Calvert and Christina Carlisi, as the two fathers, vibrate with indignation, bust buttons with pride, and offer up charmingly stereotypical views of men obsessed with position. Marisa Chandler and Susan Keller, as the two mothers, sweep into scenes with pompous pride, all the time emphasizing the fairy tale quality of the piece. This is accented by costuming (by Holly Victoria) and make-up which make them seem remarkably similar to the characters painted on traditional porcelains of eastern Europe.

As the children, Tilsit and Gouda (underscoring the family obsessions), Ben Campbell and Jessica Evans prove likable and earnest, creating the obvious contrast between these imaginative and innocent individuals and their grasping elders. The choice to use adult actors to play these parts works well for the plot, and underscores the fantasy elements of this tale.

In a triple-contribution which rarely works for productions, but does this time, the group’s co-founder Lance Davis, who wrote and presumably also directed this venture, acts as narrator (when a rat) and mayor of the town to fine effect. Jill Rogosheske makes a thoughtful, even tempered piper. Several members of the cast double as rats, when needed, with an easy, clever costuming that is both well crafted and suitable for the quick changes the show demands.

Carlisi, Calvert and Evans also provide the choreography – occasionally formal, more often a take on folk movement, which is part of this show’s charm. Indeed, the movement, intensity and pacing are the highlights. The performers sing with great enthusiasm, though not always with concert-like accuracy, and the story sweeps along so quickly that one blinks and it is over.

The creatively low-budget set and props are made to travel, and I’m sure this will. The audience – many of whom were children – stayed engaged throughout, and came away buzzing with enthusiasm.

More importantly, this is one of the purposes of theater in today’s world: engaging those who would not otherwise set foot in a theater with the charm and immediacy of live performance. Not only children, though they were obviously a focus for this show (even though the thing is advertised only for kids 12 and up), but adults, as the rest of their planned season underscores.

Informationally, this upcoming season rolls forward with the ubiquitous “A Christmas Carol”, followed by a series of comedies now part (even if sometimes a mild part) of the theatrical imagination: “The Barber of Seville” (not the opera, the original play), “The Madwoman of Chaillot”, and finally “Our American Cousin” – now known mostly as the comedy Abraham Lincoln was watching when he was shot.

One response to “Quick and Silly: “The Pied Piper of Hamlin” from Parson’s Nose Productions”