“The Bridges of Madison County” at the Ahmanson: Great Songs, Elaborated Story

Leave a comment Posted by Frances Baum Nicholson on December 20, 2015 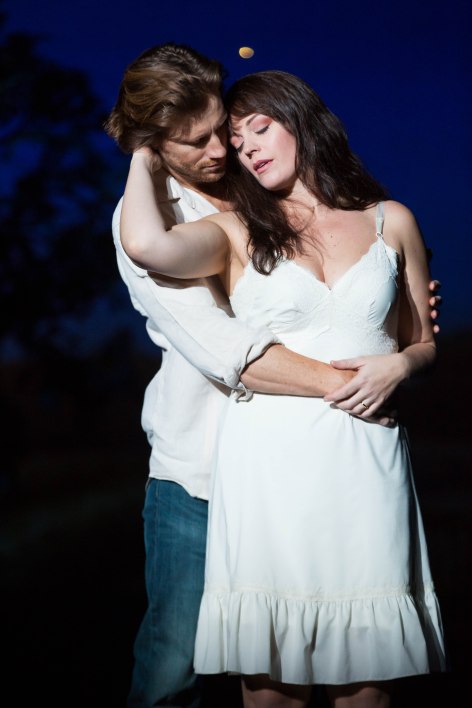 Andrew Samonsky and Elizabeth Stanley in the Tony Award-winning “The Bridges of Madison County” at the Center Theatre Group/Ahmanson Theatre. [Photo: Matthew Murphy]

I admit to much anticipation about the arrival of Marsha Norman and Jason Robert Brown’s musical adaptation of “The Bridges of Madison County” at the Ahmanson. From everyone I’d talked to who’d seen it in New York, the music was extraordinary. Indeed, the Tony Awards it received were both to Brown for the insightful lyrics and music, and for the lushly emotional orchestrations. What nobody discussed much was the book of the thing – the script. Everyone knows “The Bridges of Madison County” from either the novel or the wildly popular 1995 film, yet this was rarely mentioned, perhaps in part because it is a variation on the known.

And herein lies the problem. For anyone deeply attached to the storyline as they know it from those other, older sources, award-winning playwright Marsha Norman’s spin will cause some awkwardness. Unlike the novel, this time the story is told strongly from Francesca’s point of view. And the tale covers much larger ground, taking us back to the Naples from which she came, and forward to the end – not just of the immediate romance – but the longer, more complex lives of the two protagonists. The emotional struggle is there, and perhaps even more mature than before, but the question marks are gone.

Having never seen the film or read the book, I was freed from expectation, though I did take someone with me who was familiar with both. Still, for those around me who were enthusiastic, it was obvious that the music was the thing. Brown, who is conducting during the Los Angeles run, even has his own fan base: clumps of young people raced to the orchestra pit at show’s end to have a word with him. And there’s reason. The word “rich” is overused for theatrical scores, but here it is absolutely correct. The combination of profound lyrics which move people and even plot forward and this emotional swirl of music which matches the timbre of character and passion so precisely creates the essential reason to see this show performed live.

As for story, it’s fairly well known by now. Francesca, a WWII war bride from Italy, lives on a farm in the small town of Winterset, Iowa. It’s 1965, and her husband Bud and teenaged children have taken a prize steer to a major competition leaving her behind – a situation which she is very comfortable with. When a National Geographic photographer named Robert comes to her door, lost while looking for the last of a series of local covered bridges he is to capture for the magazine, there is an instant rapport. This turns quickly into a whirlwind and heated romance – a kind of passion Francesca has never known before, and a connection which surprises Robert at its intensity. Then, as Bud and family return, comes Francesca’s choice. The difference this time is we see where that choice takes her.

Elizabeth Stanley is Francesca, convincingly a farm woman while still radiating a sense of tamped down expectation. Her operatic voice gives grounding to the songs of questioning and of discovery she sings. Andrew Samonsky’s ruggedly handsome Robert carries himself with a confidence born of independence, yet softens into songs of yearning (“Temporarily Lost” proves particularly heart-tugging) and of passion which round out his character in non stereotypical ways. In critical supporting roles, Cullen R. Titmas turns Bud into a deeply caring soul aware that his passion for his wife is not returned in the same measure, but loving her all the same. Mary Callanan is a hoot as the nosey, but empathetic neighbor who underscores for Francesca that she is not alone. David Hess, as the neighbor’s lightheartedly devoted husband has some great comic bits all his own.

What makes this musical work as much as it does, beyond that warm, enveloping score, is the quality and maturity of the lyrics. These are grown people handling grown yearnings – wistful, inquiring, loving, frustrated, passionate – and their complexity is reflected in what they sing far more than in what they say. Which is all to say that the reason to see “The Bridges of Madison County” is to be swept away by that element. Stage musicals have that capacity to make song into dialogue in a way which really doesn’t translate at the same power level to any other medium. Here it is key, and well worth taking the time to stop and listen, even if the way the story has been laid out seems somewhat dissonant, at least as it is carried further than the novel, from expectation.