Leave a comment Posted by Frances Baum Nicholson on November 11, 2017 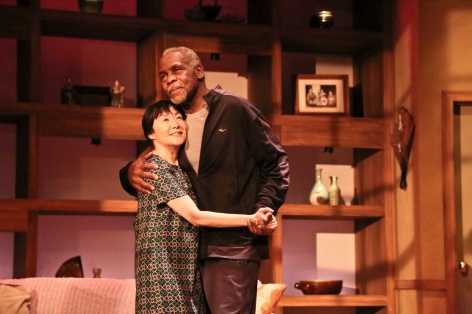 Eighteen years ago, Danny Glover and the late Nobu McCarthy shared the stage of East West Players in Philip Kan Gotanda’s “Yohen,” about the struggles of an couple coming to terms with the husband’s retirement after 37 years in the military. At that time Glover was 53, and the idea of him as a GI who married a girl he met while stationed in Japan a decade or so after World War II ended, when he was still seen there – as the character’s wife explains – as part of the conquering army, made sense.

Now “Yohen” is on stage at East West Players again, in a joint production with The Robey Theatre Company. The play’s title references the Japanese term for an accident during the firing of a ceramic, where ash scars and unintended cracks appear on the piece making it either more interesting or destined for the trash. Here it serves as a metaphor for a long and complex intercultural marriage the play examines.

For reasons one cannot quite figure, Glover is again playing James, the husband in this two-person performance. Now he is in his 70s, and looks it. He struggles with lines and with the physicality of the character, who is rediscovering himself by boxing with potential Golden Gloves contenders at a local gym. The idea that this man only recently stepped away from a career in the military, at the pay grade that he claims to represent, is nonsensical. And that is really too bad, as the play deserves better.

So does June Angela, who plays Sumi, James’ Japanese wife. She should be balancing the bombast and physicality with a cultural reticence which should be allowed to begin to show cracks and ash, just as the pots the character creates do. Sometimes she even gets to do that, and show a genuine craft open to appreciation. Unfortunately, much of the time she is left to try to figure out when to interject into Glover’s repetitive, sometimes gasping lines of dialogue, giving the sense that the lines she would normally respond to aren’t always there.

Director Ben Guillory has done what he can to make this very talky, and rather episodic tale hang together. Naila Aladdin Sanders has provided a fascinating set, which when combined with Michael Ricks’ lighting, sets tonal changes and provides fascinating interludes between scenes. Still, polished as this production is, it can’t compensate for Glover’s performance.

Playwright Gotanda is one of the strongest voices in the Asian-American play-writing community, and this particular play’s examination of the struggles of an interracial and intercultural couple, on and off of military bases, who came together in the very early 60s, has a lot to say about marriage, about identity and self-worth, the lies we tell ourselves to keep moving forward. The question mark of its ending should leave one touched and pondering.

So, again, the biggest question in all of this is “Why?”. Why have a person who does not fit the character play one character in a two-person play? Perhaps having a major star in the piece will be a draw, and help pay the bills. Perhaps. But it doesn’t do Angela, Gotanda or even Glover service to have done so.