“Nothing is The Same”: Pearl Harbor As Kids Saw It

Leave a comment Posted by Frances Baum Nicholson on January 27, 2018 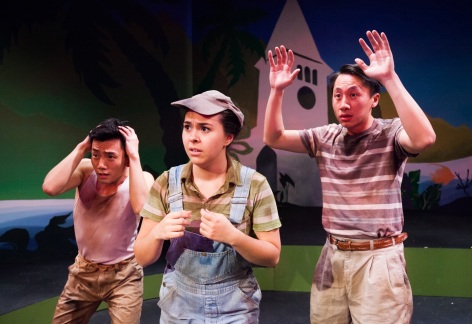 Tristen Kim (l.), Asia Ring, Yeng Kong Thao as children on Oahu as bombs fall in 1941 in “Nothing is the Same” at Sierra Madre Playhouse [photo: Grace Kim]

For the past four years the Sierra Madre Playhouse has expanded their offerings to include a play intended to bring some piece of history, science or culture to school-aged children. In so doing they have hosted over 10,000 school children from 9 school districts. Now the fifth such production has landed on their stages, and it is particularly fine. “Nothing is the Same” by Y York examines the racial tensions of Hawai’i in the first years of World War II through the lens of four Pacific-Asian schoolmates living near Wheeler Air Force Base on the island of Oahu, on and just after December 7, 1941.

Directed by the celebrated Tim Dang, himself originally from Hawaii, the play has a specific ring of authenticity both in the characters created and the atmosphere created around them. Quick (it is only an hour and fifteen minutes long), and specific, “Nothing is the Same” uses a simple setting – the site where children gather to play marbles – to exemplify everything that was questioned, and questionable, about life on the island once the attack had come.

There are two casts which alternate in performance. The “Makai Cast” featured Melvin Biteng is George, a likable Filipino youngster focused mostly on trying to improve his technique enough to win back the marbles he consistently lost in games with his friends. Asia Ring is Bobi, the tomboy Korean girl born in Hawaii – quick to judge, but equally quick to correct herself. Tristen Kim is Daniel, the poorest of the children and Korean by birth, who harbors his family’s dislike for the Japanese based on his own people’s experience. Yeng Kong Thao is Mits, the Japanese marbles champ who attributes his skill to his samurai background until the attack places him as the enemy.

The interplay of the children is all in classic Hawaiian Pidgin English, which has its own musical lilt (the program comes with a glossary), but the themes are distinctly current in feel. The attack turns Mits into the enemy even though he was a friend the day before. As the outgoing boy becomes increasingly frightened and withdrawn, Daniel finds new power as the neighborhood bully, enjoying his suddenly assumed superiority and taking everything he can.

Still, it is Biteng’s George and Ring’s Bobi who center the piece, as they struggle to find their identities in the changing social architecture, and to wrestle with issues of fairness, friendship and what truly makes a hero or a champion in a world torn by war and invaded by masses of gullible new GIs unused to island ways. Indeed, these children, as played by young adults, evoke a genuine quality which makes their struggles easy to empathize with – especially the internal wrestles with the difference between the Japanese person they know and what is being trumpeted by adults regarding who the Japanese are.

A particular nod must go to Kelsey James Kapono Chock, whose insertion of hula movement gives power to several important but otherwise difficult to stage scenes, and whose dialect coaching grounds each character in time and space. Tesshi Nakagawa has painted a set evocative of location and art style of Hawaii in that period. Rod Salasay’s ukulele artistry adds to the sense of place. Still, with minimal props and much use of audience suspension of disbelief, it is the four performers who make this thing work, creating a solid sense of ensemble.

“Nothing is the Same” won the Hawai’i Award for Literature, a testament to its grounding in a sad but important-to-remember truth. To introduce students to another time when children and adults made snap judgments about those around them based on what, rather than who, they were is important in this day, when many do the same to yet another group of neighbors within our communities. Indeed, one cannot think of a time more ripe for making students think outside the superficial judging of people in some way unlike themselves.

The production in Sierra Madre will be enhanced by specific cultural nights focused on the Japanese cultural experience in the San Gabriel Valley, a chance to learn hula, and a collection of mini-workshops on the cultures of the Philippines, Korea and native Hawaiians – helping create further understanding of the cultures represented in the play. Check the theater’s website for more information.

What: “Nothing is the Same” When: Through March 4, 2:30 p.m. Saturdays and Sundays, 8 p.m. Saturday February 24 and March 3, plus multiple times and dates on school days for invited student groups. Where: Sierra Madre Playhouse, 87 W. Sierra Madre Blvd. in Sierra Madre How Much: $30 general, $27 seniors, $20 youth (20 and younger) Info: http://www.sierramadreplayhouse.org