Elliot, A Soldier’s Fugue: A Trilogy Starts at the Douglas

Leave a comment Posted by Frances Baum Nicholson on February 10, 2018 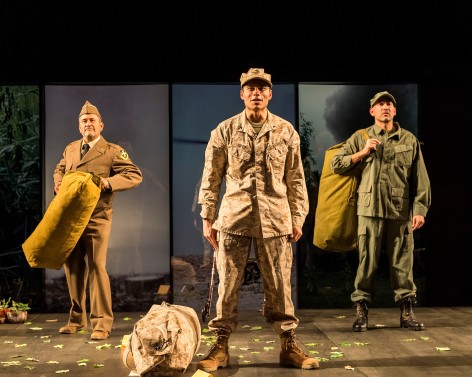 What happens when a young man joins the service as his father and grandfather before him did? Over the course of our national narrative, particularly over the last century, this has been a recognized, even celebrated legacy. Bring it up to modern times, however, and modern sensibilities, and what is this legacy actually doing? How does the enormous irregularity of Vietnam play into that framework?

“Elliot: A Soldier’s Fugue,” the first in a trilogy by Tony and Pulitzer Prize-winning playwright Quiara Alegria Hudes, examines this and more as it balances three generations of a Puerto Rican family’s struggle with just that legacy. Now at the Kirk Douglas Theatre in Culver City, the play examines what these men carry with them, what they cannot tell, how they coped, what that cost, then balances that against their innate love of the natural beauty found in an island which remains a nation within the larger nation they fight for.

Elliot is young Marine back from the invasion of Iraq to recover from wounds suffered there. He enlisted without telling his family, but proud of the fact his father and grandfather had also served. His father, Pop, never talks about Vietnam, though he met Elliot’s mother – a nurse in an evac hospital – during his own recovery from wounds. His grandfather suffered through the winters in Korea, keeping his fellow combatants’ spirits up by playing Bach on his flute. We watch an interplay – a fugue – of all four people’s experiences, both in combat and in coping with the after-effects of what they cannot fully explain.

In this mix, what will Elliot do, as he struggles to define the older men’s understanding, and prepare himself for a return to the front?

Peter Mendoza fills Elliot with the optimism of youth, and a quiet version of curiosity about how his own understandings stack up against those of the older men who will not share experiences with him. Jason Manuel Olazabal moves like a man with something twisting inside as he relives the nameless threats which balance against and overwhelm humane moments of soldiering, the scarring effects of Vietnam. Ruben Garfias handles the switches from aged grandfather declining into dementia to young soldier struggling to play a flute with frostbit fingers – the inner memories which may not surface.

All turn wistful when thinking of the lush greenery of Puerto Rico, and their sense of community there even when returning after long absence. In this they echo Caro Zeller’s former nurse, pulled into a sense of life by tending a random, junglesque garden in the midst of New York. That constant juxtaposition of verdant life with the consistent experience of death and horror which constitutes military action forms another fugue within the play.

Director Shishir Kurup has used Sibyl Wickersheimer’s seemingly simple photo panel set to create a sense of generational link and disconnect as one floats from the present to the past to the present again while the stories intertwine. The focus on the fragility of each of these characters, even as each of them pull themselves up to move forward, underscores the needed message this play has for the world. Depending on who one empathizes with, this can be read – as most fugues can – more than one way.

“Elliot: A Soldier’s Fugue” is the first in Hudes’ “Elliot Trilogy,” which are all being performed in Los Angeles in overlapping productions – the first time any city has hosted all three at once. Next on the list is “Water By the Spoonful” at the Mark Taper Forum.