“Singin’ in the Rain” at Candlelight: Singing, Dancing, and All the Trimmings

Leave a comment Posted by Frances Baum Nicholson on May 5, 2018 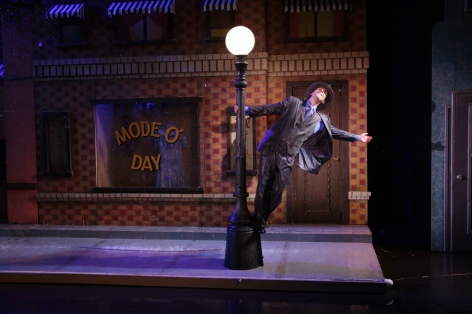 Wesley Alfvin in the classic moment from “Singin’ in the Rain” at Candlelight Pavilion Dinner Theater [Photo: Demetrios Katsantonis]

Is there any more iconic movie musical than “Singin’ in the Rain”? The move to bring it to the stage has been, from the start, a risky one, simply because it must compete with something so familiar. When it works, though, it is a sheer delight of old-school musical fun: catchy songs, clever comic characterizations, and lots of tap dancing.
Now at Candlelight Pavilion Dinner Theater in Claremont, it is indeed done well, and the result is a rollicking delight, made only that much better by the Candlelight Pavilion’s traditionally tasty meal.
The tale is now part of the American canon: Don Lockwood and Lina Lamont, silent screen heartthrobs, are caught in a conundrum when talkies suddenly arrive, thanks to Lina’s less than glamorous pipes. Enter Kathy Seldon, an aspiring actress Don is attracted to, who can sing up a storm. What will be her role? Will “Lockwood and Lamont” survive? And what will be the role of Don’s comedic best buddy Cosmo, in the new world of movie music?
Director/Choreographer DJ Gray has adapted the great dance numbers, many of them created by Gene Kelly, to the Candlelight stage – a brilliant move, creating the reminiscence which is part of the musical’s charm.  The performers, from chorus to stars, dance up a storm, and have the energetic verve which propels this kind of production.
Wesley Alfvin leads the cast as Lockwood, cutting a handsome figure, singing convincingly, and dancing well enough to make Kelly proud. Andrew J. Koslow, as Cosmo, handles the difficult comic “Make ‘Em Laugh” with aplomb, even if some of the pratfalls are made awkward by the sheer necessity of movable set pieces. As Kathy Seldon, Colette Peters keeps up with the two guys on the dancing front, and sings respectably, but Krista Curry all but steals the show as Lina, producing a voice which can only be compared to fingernails on a blackboard.
John Nisbet brings both kindness and fluster to the head of the studio, while Brandon Kallen flings about appropriately as the director also forced to change styles with the advent of sound. Still, in many moments the real stars are the members of the versatile ensemble, playing small parts, providing background or supporting song-and-dance folk, and generally setting the tone for the entire piece.
Kudos go to music director Douglas Austin for finding the sound of early talkies, and getting the most out of those classic tunes. A nod also to Mitch Gill, whose set proves agile enough to keep the story rolling, and yet incorporate all the many and varied settings (and demands of some of the signature production numbers). Yes, it actually rains, and yes, if you sit right by the stage you may get wet.
“Singin’ in the Rain” was never a wildly deep story, but rather a chance to celebrate some of the best of what classic movie musicals were about: songs, dancing, romance, and fun. If that calls to you, then go see this production. Candlelight Pavilion shows, at their best (and their recent shows have often been among their best ever) can be a welcome respite from the complexities and uncertainties of the workaday world. And you eat well.
What: “Singin’ in the Rain”  When: through June 2, doors open for dinner at 6 p.m. Fridays and Saturdays, 5 p.m. Sundays, and for lunch at 11 a.m. Saturdays and Sundays  Where: Candlelight Pavilion Dinner Theater, 455 W. Foothill Blvd. in Claremont  How Much: $63-$78 adults, $30-$35 children 12 and under, meal-inclusive  Info: (909) 626-1254, ext. 1 or www.candlelightpavilion.com

Uncategorized
← “Noises Off” at A Noise Within: Carefree, Funny and Well Done “Red Speedo” at The Road: Ethics, Sports, and the Individual →