“Noises Off” at A Noise Within: Carefree, Funny and Well Done

Leave a comment Posted by Frances Baum Nicholson on May 5, 2018 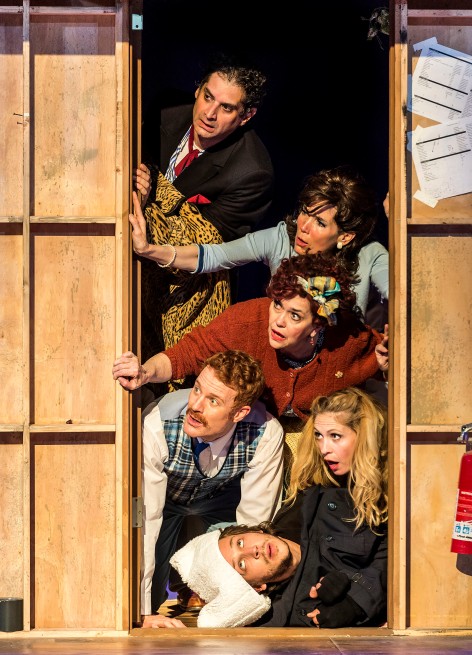 The cast of “Noises Off” at A Noise Within [photo: Craig Schwartz]

Farces, as a general rule, are hard to kill. Some evoke chuckles, some evoke laughter, and a very few regularly  bring an audience into a state of howling laughter. Of this last category, one of the best is Michael Frayn’s “Noises Off,” a wild send-up of the theater itself. From start to finish it contains memorable characters, ridiculous situations, and furious timing, which work together to make one of the great, lighthearted comedies in the modern theater.
At A Noise Within some of the resident company’s best performers have gathered to give this silly, wonderful thing the finesse it deserves. The results are everything one could hope for: clever and beautifully timed, and solidly funny from start to end.
The play’s premise is very simple: a second-class provincial theatrical company, underrehearsed and full of interpersonal drama, is about to embark on a tour. We meet them during the final dress rehearsal, and that’s about as close to what the play should look like as one will get. From there we look at the show, literally from back to front, as the internal dramas and inadequacies begin to take over.
Geoff Elliott leads the cast, giving the fatalistic director of the play-within-this-play a real-ness which is absolutely necessary for the comedy to work. Indeed, that is what makes this comedy so funny – everyone onstage is playing it straight, even when their characters are ridiculous. Deborah Strang has a ball as the rather vacant, aging star, Kasey Mahaffy proves wonderfully fresh as the most inarticulate of the cast members, and Emily Kosloski does the classic airhead with remarkable focus.
But the good news doesn’t stop there. Jeremy Rabb makes his character’s fragility funny, Jill Hill gives the company’s gossip style and limited patience, and everyone works to keep Apollo Dukakis’ rather dim character off the sauce. Erica Soto plays the beleaguered stage manager, while Rafael Goldstein is the everything-else the company depends on, always on the verge of exhaustion. Everyone plays their parts to the hilt, but with the strong sense of ensemble absolutely necessary for this crazy piece’s elaborately intertwining gags to work.
Elliott, along with fellow artistic director Julia Rodriguez-Elliott, has directed this whole piece with an obvious love for both the play and the participants. As a result, the thing is simply fun. Truly fun, from start to finish.
Kudos also to Fred Kinney for the ridiculously impossible set – full of doors which could not possibly be that close together – which looks good from back as well as front. Indeed, some of the show’s stars are the stage crew who shift the set from front to back to front with precision. Costumer Angela Balogh Calin has each performer looking just a tad overdone, as the play requires. It all works.
If you are looking for pure entertainment, you won’t find anything more satisfying than “Noises Off,” particularly when done as well as on stage at A Noise Within. Go take a look before they sell out.
What: “Noises Off”  When: Through May 26, 7:30 Thursdays, 8 p.m. Fridays, 2 p.m. and 8 p.m. Saturdays, 2 p.m. and 7 p.m. Sundays  Where: A Noise Within, 3352 E. Foothill Blvd in Pasadena. How Much: from $25, student rush with ID $20 before any performance  Info: (626) 356-3121 or www.anoisewithin.org

Uncategorized
← When is a Thriller Not a Thriller?: “Belleville” at the Pasadena Playhouse “Singin’ in the Rain” at Candlelight: Singing, Dancing, and All the Trimmings →