Leave a comment Posted by Frances Baum Nicholson on September 28, 2018 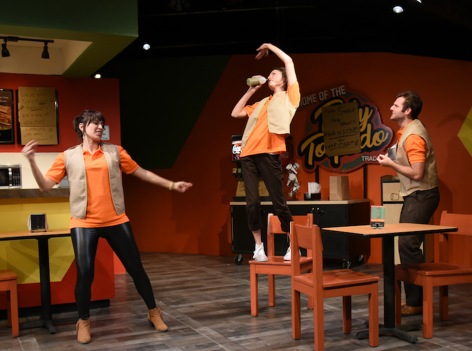 If one had to peg a single theme for the plays I have seen open in the past month, it would be two-fold: the heartlessness of corporate America combined with the innate sense of straight white privilege, and the plight of those the privileged see as underclasses, be they minority cultures, blue collar victims of the evisceration of union power, or simply those trying to get by in the morass of the service economy. The most recent contribution in this regard is IAMA Theatre Company’s production of Bess Wohl’s “American Hero,” now at the Carrie Hamilton Theatre, upstairs at the Pasadena Playhouse.

In “American Hero,” a trio of employees are hired to help open a new franchise of a chain sandwich shop in a local mall. When these “sandwich artists” are left to their own devices, abandoned by their supposed owner, their levels of desperation and ingenuity both pour out, leading to a sense of cohesion based on mutual respect which becomes a strong contrast to the corporation which technically controls their futures. The play proves funny, sad, biting and human all at once.

Director James Eckhouse has assembled a strong cast, and a strong sense of cohesion which makes the play come alive. Graham Outerbridge, as Ted, a typical white guy struggling to find a place outside the corporate world he’s been booted from, balances the man’s mental cliches with an undercurrent of vulnerability in ways which make him surprisingly endearing in the long run. Anna Lamadrid gives great credence to Jamie, whose in-your-face sensuality covers up her desperation and family struggles.

Laura Mann’s Sheri radiates a kind of innate practicality which gradually morphs into real strength – all in body language from the person one initially deems the most unlikely to have that inner fire. Add to these Nick Bonanno, who it is difficult to believe is only the understudy for Bob the shop owner, and several other important invaders of the sandwich trio’s space, and you have the complete package of timing, character, intensity of action, and purpose. All on Justin Huen’s impressively realistic set.

Kudos also to Melissa Trn for a company uniform both bland and official-looking, another notch in defining these workers as mere cogs in a machine which has run out of gas. Michael O’Hara’s props become characters, and Edgar Landa’s choreographed violence proves startlingly believable.

Still, what matters most are the people in this tale. Their fears, frustrations and coping skills prove both funny and tragic, as they gradually reinvent both their store and themselves, and – oddly enough – a kind of hope which will power them forward. It is a play worth seeing, filled with images one really needs to put in the back of one’s mind for the next time one walks into a fast food establishment.