Stunning “Fun Home”: A Musical Balance of Whimsey and Heartbreak

Leave a comment Posted by Frances Baum Nicholson on February 25, 2017

It is rare to say that one has seen a musical without a flaw – or at least a flaw that doesn’t serve the purpose of the work – yet that is what must be said of the musical “Fun Home,” just opened at the Ahmanson Theatre. The winner of 5 Tony Awards, including Best Musical, the show is adapted from the award-winning, autobiographic graphic novel by Alison Bechdel. On stage, one watches the tale that Bechdel told in her book, while at the same time watching the artist wrestle with its creation. This all works with a wit and pathos which proves engaging from start to finish.

“Fun Home” (a family euphemism for the family business – a funeral home) is the story of Bechdel’s coming of age in a tiny Pennsylvania town, focused on two competing forces: her relationship with her autocratic, esthete of a father (whose life in the closet informs his connection with his family) and her coming to terms with her own lesbianism.

Utilizing three versions of Alison at the same time, it features the 43-year-old cartoonist Alison, the 19-year-old “Medium Alison” in her discovery-filled first year at Oberlin, and the 10-year-old “Small Alison” trying to figure out the hows and whys of her particular, peculiar world. These three, played quite brilliantly by a wry Kate Shindle, a wide-eyed Abby Corrigan and an extraordinary Alessandra Baldacchino respectively, center the piece in its convoluted but engrossing character studies as Alison bounces off the people who formed her understanding of self. 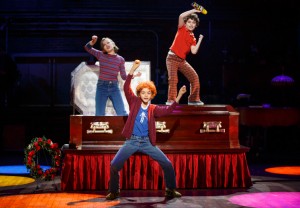 Alessandra Baldacchino, Pierson Salvador, and Lennon Nate Hammond in one of the funniest moments from “Fun Home” [photo: Joan Marcus]

As musicals go, this one defies some of the usual conventions. The songs of Jeanine Tesori, who composed the music, and Lisa Kron, who wrote the lyrics as well as the book, prove organic to the tale itself, moving with ease from delightful silliness to deep introspection in ways which may not be immediately hummable but rather become emotional touchstones within the larger tale. In their lighter moments, the charm is radiant, as one realizes early on when Small Alison and her two smaller brothers (Pierson Salvador and Lennon Nate Hammond) create their own ridiculously upbeat commercial for the funeral home, after being caught playing inside a casket.

In darker moments, they provide the vehicle for understanding the interior wrestlings of Alison’s parents, as they sing their inexpressibles. As her father, a popular local English teacher with an obsession for antiquities which extends to his museum-like restoration of their home, Robert Petkoff’s every move evokes subtle hints of the man’s internal struggles. Susan Moniz gives her mother, the ballast of this tense and exacting household, a particular form of rigidity rooted in both knowledge and anger.

As Alison’s college girlfriend, Karen Eilbacher moves with an ease which describes her comfortable self-knowledge, creating a door for Alison’s own. Robert Hager rounds out the cast, and underscores the father’s angst and sense of shame, as a series of separate and distinct young men who attract his illicit fancy. Which may give the impression that “Fun Home” is grim. Nothing could be farther from the truth. Though there are moments of deep sadness and guilt, this is essentially the story of self-discovery, and the joy to be found in being oneself.

Director Sam Gold keeps the thing fluid, as David Zinn’s costumes and sometimes minimalist sets make one able to look backward and forward at the show’s critical moments. Danny Mefford’s choreography utilizes the children’s gifts most remarkably, while Chris Fenwick’s musical supervision, and Micah Young’s musical direction of the onstage orchestra, links the real and the fantastical into a most satisfying whole.

“Fun Home” is, in the end, a whole-body experience. Played in 90 minutes, without intermission, its slow build keeps one enthralled until the shock and understanding of ending – one which tends to propel the watcher to his or her enthusiastic feet.