Tag Archives: Bring it On!

“Bring it On: The Musical” – It actually does bring it (who knew?) 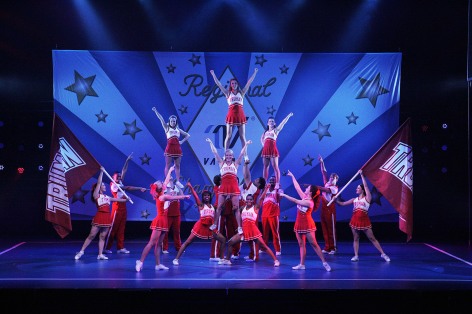 The cast of the national tour of "Bring It On: The Musical"

You know something important about the show when you read the bios of the “ensemble,” most of whom have extensive cheerleading experience. The poses, the extensive use of elaborate throws, and the distinct sense of watching acrobats working without a net get one’s adrenaline popping from the moment the curtain rises. In the midst of all these acrobatics, the simple – one might say simplistic – story ends up shining as well.

It’s a predicable plot. A girl whose life has revolved around cheerleading at her stereotypically upper middle class white suburban school is suddenly transferred to a far more diverse, poor and inner city one. What begins as a rather uncomfortable (at least to the audience) dose of racial and urban stereotypes evolves into a lesson on individuality and tolerance. This girl, who thinks she knows everything, has a lot to learn. When she does, she uses what she’s learned to build a team which can teach the rest of the cheerleading world a thing or two.

Almost all of this is told in song, and in a style which helps define each setting. The music and lyrics of Tom Kitt, Lin-Manuel Miranda, and Amanda Green capture the flavor of high school life, from pop to hip-hop. That comes together with a sound design by Brian Ronan that lets the the music get loud enough for modernity, yet allows for the lyrics to not only stand out but be understandable. Put this together with the wild cheerleading moves and the whole is positively captivating, in a kind of unassuming way.

Taylor Louderman leads the cast as Campbell, the insulated kid whose dreams are dashed by her transfer. She sings with authority and handles her many elaborate routines with energy and style. Elle McLemore makes fun work of the deceptively innocent sophomore who plots Campbell’s downfall for her own ends. Adrienne Warren rises above the stereotypes to make Danielle, the “crew” leader of Campbell’s new school, an amusing and sympathetic character.

Along with these strong leads, standouts in the enormous cast include Ryann Redmond as the earnest but heavy Bridget, Nicolas Womack energetically individual as the guy she can’t believe finds her attractive, and Gregory Haney bringing humor, dignity and enthusiasm to the transsexual among Danielle’s followers.

A nod must also go to David Korins’ entirely video-based “set,” in which a series of screens swoop and weave between and around the performers, shining as walls, landscapes, score boards, and anything else necessary to the action. Indeed, the set sometimes appears as energized as the actors.

“Bring it On: The Musical” is certainly not “Les Miserables,” or even “South Pacific.” It has few illusions to any kind of sophisticated grandeur, literary or otherwise, leaning more on being a very fast-paced and entertaining spectacle. Yet, in the midst of all the intensity, gentle and often humorous reminders to look more than skin (or income) deep give a moral nudge toward respecting the individual. In the end, it does have something to say.

To be frank, I dreaded going to see “Bring it On,” which I assumed would be either trite or ponderous. That it is only mildly the first, and definitely not the latter was a startling surprise. You just can’t help but smile at this thing, which I believe is great family fare, at least if you’re in the kind of family which wants kids to learn about tolerance and not prejudging people. And the gymnastic feats really are absolutely breathtaking.