“I Am Sophie”: Examining the Meaning of Identity

Leave a comment Posted by Frances Baum Nicholson on September 1, 2018 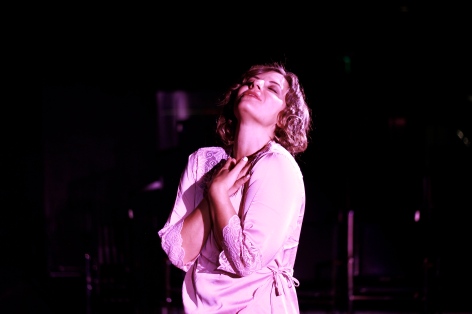 The entire idea of identity is one which has come increasingly to the forefront of modern conversation. What makes someone who they are? What if what they see in the mirror isn’t who they feel they are inside? What if being genuine to themselves means not being the person others have always known them to be? What may be lost in the process?

This is the core fascination with Corinne Shor’s “I am Sophie,” a one-woman show performed by the author, now at The Pico. An expansion of Shor’s initial exploration during the 2017 Hollywood Fringe Festival, the play is a monologue by a young Minnesota woman named Kate.

Kate – after spending a period in France – comes home to be near her father in his last hours having turned herself into someone else. She is Sophie. She speaks with a French accent, uses French as much or more than English, and feels freed by the entire process of reinvention. Now, when asked to be Kate, she finds it stilted and a grim denial of who she really is. Some of her family embrace the change. Some do not. It proves good for business, as she and her brother take over the shop, however, some look askance at what they see as playacting.

Director Susan Angelo gets the story beneath the story, and creates a sense of movement which keeps the whole thing from being static: enough furniture, enough costume adjustments, and generally enough business to make Sophie’s journey from discovery to comfort, to true self-acceptance animated, emotional, and consistently engaging. Shor gives to her creation a sense of light and dark and light, as Sophie must occasionally try to be Kate again, and then returns to the person she believes is her personal truth. It all works.

Of course, Sophie’s journey is a metaphor for many other journeys of discovery. As she meets with resistance, finds acceptance (her mother, embracing the change, still warns her she will “lose people” over it) and comes to terms with what her future holds, it can resonate with an audience facing any number of struggles for the self. It is that very universality which makes the play and performance work.

Take a look at “I Am Sophie,” if only to capture a lovely tale, but mostly because it is likely to make you hold up your own mirror to check who you are.

Like Loading...
Review Can one decide to be French?, Corinne Shor, Examining Self-Identity on stage, I am Sophie, One-Woman Shows, The Pico Theater