Delightful “Ah, Wilderness” Lights up A Noise Within

Leave a comment Posted by Frances Baum Nicholson on March 18, 2017 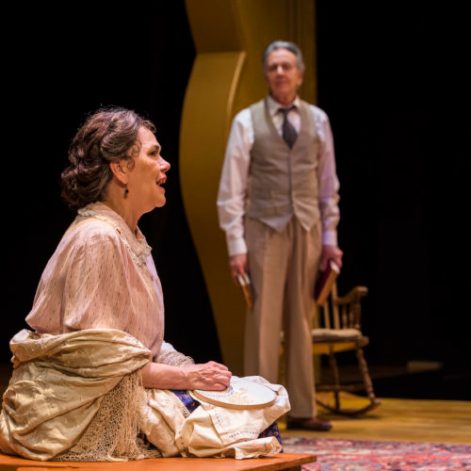 When one thinks of Eugene O’Neill, one thinks of wrenchingly serious plays, but “Ah, Wilderness” gives him a chance to explore the comparative innocence of a life he wished he could have lived. In the new production at A Noise Within, the play becomes a charming celebration of the nature of adolescence with characters recognizable over time and ethical distance in a way which makes the entire play approachable and embraceable.

In this warmhearted view of a middle class, small town family’s 4th of July in 1906, we follow 17-year-old idealist Richard Miller as he butts heads with his practical father, college-boy elder brother, overly nourishing mother, and the rest of his extended family. He yearns for the daughter of an overly straight-laced man, reads the Rubaiyat of Omar Khayyam, espouses socialism, and generally disrupts the calm of his family circle. In the ANW production, this comparatively lighthearted tale has been laced with popular music of the period – a move which instantly reinforces both the setting and the lighthearted nature of the thing.

Nicholas Hormann sets up the feel of the entire piece as Nat Miller, the easygoing patriarch of Richard’s family and publisher of the town newspaper. That very casual but upright “man of the world” quality sets the tone for the family and the entire play. Deborah Strang fusses and nurtures as Richard’s warm, worrying mother. Against these settled people’s maturity flails Matt Gall as the passionate Richard, whose journey into rebellion (and then back into the fold) becomes the focal point of the play. Gall gives Richard both the aura of conviction and the simplicity of lovesick youth in a combination which works well to tie all the pieces of this tale together.

Ian Littleworth, as Richard’s Yale-going elder brother, reflects the pompousness of the newly independent young man, while Katie Hume and Samuel Genghis Christian provide Richard’s younger siblings – the very observant, somewhat sardonic younger sister and the even younger littlest brother. Indeed, there is an aura of youth and innocence throughout this family circle, which balanced by the subtle struggles of the house’s other two occupants.

As Nat’s “old maid” sister, Lily, Kitty Swink finds a combination of determination and pathos, especially in Lily’s relationship with her former love interest, the flawed Sid, whose battle with addiction – though kept lighthearted in Alan Blumenfeld’s rendition – still provides a haunting connection to the darker side of small town life. Among a sizable cast, Emily Goss gives a youthful bravado to Richard’s clandestine love interest, while Emily Kosloski has a lovely time with the “fallen woman” Richard encounters while in defiant despair.

Director Steven Robman has given these folks a timbre and a pacing which keeps the story light on its feet. Scenic Designer Frederica Nascimento utilizes very mobile set pieces to create the swift changes needed to keep that pacing on target. Most of Garry D. Lennon’s costumes evoke era and class with an easy grace. It all works together to make a delightfully intelligent and largely uplifting whole.

“Ah, Wilderness” is not a rollicking comedy, but rather will evoke the laughter of recognition, and a chance to see a rare side of O’Neill: a balance to his more usual, far more grim works. For those who have never seen it, the ANW production will be a treat. For those who have, this production will confirm why it is worth seeing again. If only coming of age always involved this much charm. “Ah, Wilderness” plays in repertory with ANW productions of Shakespeare’s “King Lear” and the soon-to-open musical “Man of La Mancha”.

Fatal Attractions: Desire Under the Elms at A Noise Within

A Noise Within, in its new performance space in Pasadena, has returned to its traditional status as a repertory theater. This weekend it began offering a second show to run concurrently with the “Twelfth Night” which opened the season. The contrast is instant and obvious. Though “Twelfth Night” was overly concept-driven, putting florid flourishes on a play to the point of dulling its original luster, this new exploration of Eugene O’Neill’s minor masterpiece “Desire Under the Elms” lets the characters become the play’s force. Interlaced in director D’amaso Rodriguez’s vision of setting and pace, the show becomes a cohesive whole, and a compelling one.

A portrait of struggle on many levels the play introduces Ephraim Cabot, the hard, aging taskmaster father who has driven two wives to their graves, and three sons into deep and powerful resentment. In his fullness of days he has taken another wife – a young widow desperate to own something and belong somewhere. Two sons desert him for California and a third, who dreams of owning the farm, remains behind. Thus begins a struggle of hearts, as Ephraim’s harshness bumps up against his new wife Abby’s grasping and his son Eben’s aching passions. Ephraim’s self-focus and determined loneliness doom them all.

In some ways the setting is almost a character. The cast’s upper New England accents, and the starkly beautiful world they see from John Iacovelli’s stark and transparent farmhouse define the world in which this wrenching drama unfolds.

William Dennis Hunt’s Ephraim looks like he stepped out of a daguerreotype, and though he plays it all in a pacing and huffing key, the part works as the rock upon which the rest of the story layers. Jason Dechert’s soft and aching Eben contrasts viscerally with Hunt’s toughness. Monette Magrath does well walking the tightrope between making Abby too calculating and not calculating enough, leading to some interesting, if debatable, interpretations of her shift in interest from father to son.

Still, between pacing and sense of ensemble rhythm, this “Desire Under the Elms” proves compelling watching. Even those in smaller parts, particularly Stephen Rockwell and Christopher Fairbanks as Eben’s two cloddish elder brothers heading for the California gold fields, fit in with the rhythm and atmosphere with a deceptive effortlessness.

On a more mundane key, and also in contrast to ANW’s “Twelfth Night,” this language-rich production proves satisfying in that you can hear every word. And here words matter, set in a culture which measured every sentence for economy as they did feed for the stock.

This “Desire Under the Elms” is a good chance to meet one of the finer plays by one of the great playwrights of the 20th century. Before him, we were a provincial theatrical place at best. He brought American theater seriousness, and an undercurrent of Greek tragedy, which Miller and Williams and others would build upon in their turns. As with the Greeks, the flaws of human interaction are inevitable and deadly. Yet, in O’Neill, we find our own roots intertwined with those fatal flaws. It’s an uncomfortable mirror, but an engrossing one. 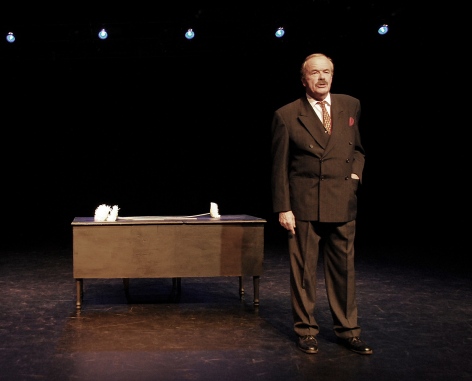 James Cady as Eugene O'Neill in The Unauthorized Afterlife of Eugene O'Neill at The Carrie Hamilton Theatre (at The Pasadena Playhouse). Photo: Ossy Werner

Among the trickier, but also potentially more interesting one-person shows are those which involve biography. Creating someone everyone wishes they had met can be immensely satisfying for both actor and audience, and historically illuminating to boot. Take, as the prime example, Hal Holbrook’s “Mark Twain Tonight” which utilizes Twain’s own writings and speeches to recreate an evening with the quintessential American author.

The trick is having enough to say, saying it as the historical personage would have, and creating enough “business” while in front of people to keep the thing from becoming a costumed lecture. All of this should be taken into account by the creators of the rather self-consciously titled “The Unauthorized Afterlife of Eugene O’Neill,” now at the Carrie Hamilton Theatre upstairs at the Pasadena Playhouse.

Playhouse grad Jim Cady is both author and star of this piece, in which an ethereal O’Neill speaks to us of his life from a position similar to Marley’s Ghost of Dickens fame. He is out to crow a bit about how he changed literature, and then speak of the dysfunctional and depressive family from which his creativity was born. A litany of despair, addiction, suicide and neglect fill the evening. If only it were said with the eloquence of O’Neill.

Except for segments all but quoted from O’Neill’s own work, the Cady script tends to float into the simplistic and the cliché. For example, a great man of letters would not, more than once, refer to death as a “shuffle off to Buffalo.” At least, he wouldn’t in public. And, with the exception of some eventually symbolic, very large mums, there is nothing on the stage for him to work with, giving him too little to do.
Even the set, such as it is, proves defeating. What should be a desk and chair is a desk and box – a box over which the actor trips more than once.

This is not to say that the material isn’t interesting. The research into O’Neill’s personal story proves factually accurate, and sometimes quite moving. Still, the end result, under director Brian Hansen, is static. The man stands and talks much of the time. One hates being enervated by such a wrenching tale.

It reminds me of the standard poet’s critique: “don’t tell me, show me.” How could we see, through the eyes of this famous man, what it was like to decide not to go to the funeral which followed the suicide of his own brother, or his own son? Don’t tell how stunning it was to discover your own mother shooting morphine. Show what it felt like. Use quotes from the autobiographical “Long Day’s Journey Into Night” if you have to – they reveal what that was like.

Still, Cady does look the part, and the information gives an underlay to this incredible writer, whose plays changed the structure of American drama even as they pushed to the fore (as did Miller and Williams, alongside him) the dilemma of the everyman. It’s just good enough, though, that it should by rights be better.