A Hymn to the Reagans: Bad Direction, Propaganda, and Schmaltz

Leave a comment Posted by Frances Baum Nicholson on November 12, 2018 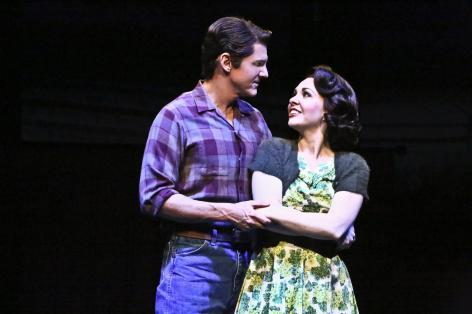 Brent Schindele and Kelley Dorney as Ronald Reagan and Nancy Davis (Reagan), at the Reagan Ranch in “In A Booth At Chasen’s” at the El Portal Theatre

One does not have to have been a fan to realize that Ronald and Nancy Reagan were fascinating individuals. Their long and dynamic marriage, their shift from the world of Hollywood to the world of state and national politics, all of this had to begin somewhere. Enter a new one-act musical, “In A Booth At Chasens’s” now at the El Portal Theatre in North Hollywood.

It’s an interesting idea. If only it lived up to the promise. Though producer John C. Herklotz goes on record from the start about how inspirational the Reagans were, it takes more artistry to turn that enthusiasm into live theater.  If only this show met that challenge.

Ostensibly this is about Ron and Nancy’s first, blind date. What it actually is is a series of brief vignettes of stages in their romance, each one with at least one song and none so long as to allow for actual character development.

The entire enterprise is less a musical in the classic sense – telling an actual story – than a framework for this series of Al Kasha and Phil Swann’s songs, which take precedence over the few lines of Sam Bennett’s abbreviated script. In between these moments of potential plot two uncredited gents schlep furniture, bicycles and standing mirrors on and off the stage while the two cast members change clothes.

Kelley Dorney is Nancy Davis. Though she sings about being shy, this is not particularly in evidence in Dorney’s performance. Still, she has a lovely voice and gives a natural quality to the character she doesn’t get much of a chance to flesh out.

Brent Schindele is Ronald Reagan, and seems to struggle between being a fairly human, frustrated actor on the professional skids (which is mentioned in just about every scene) and being an icon. Particularly when called upon to define the Reagan world view, the icon takes over and he becomes a statue – he stops moving in order to make sure the message is delivered in icon fashion. When this bleeds over into the times he is just a guy, the whole show stalls.

However, this isn’t entirely Schindele’s fault. Director Kay Cole has simply given these characters too little to do. The fellows bringing furniture on and off do not – except in the scenes inside Chasen’s itself – supply them with much in the way of props to work with, and Cole hasn’t worked with them on motivation to do more than sing most of the time.

Even in Chasen’s, Cole doesn’t connect their physical behavior to the songs they are singing. Take as example the moment Reagan, standing by the title booth, sings that he needs to run after Nancy and keep her from walking out on him (she having just left), all the while standing stock still, and then stays in that same spot to sing another verse.

Which is all to say that this enterprise has labored mightily to bring forth a mouse. Andy Walmsley’s minimalist set pieces are backed by projection screens on which Daniel Brodie has designed an ongoing salute to late 1940s Los Angeles, using archival footage of Hollywood Boulevard, Wilshire and more. The band lead by Jonathan Tessero is solid, and gives drama to the pieces. Still, it just doesn’t work.