Leave a comment Posted by Frances Baum Nicholson on November 25, 2016 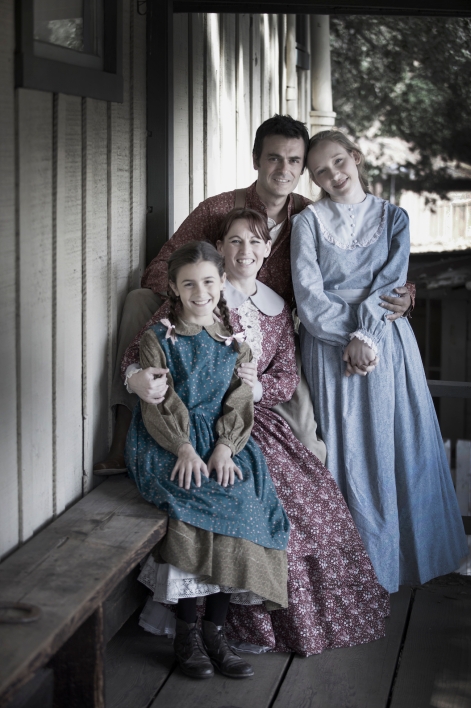 With the advent of the holiday season, the demand for something appropriate rises, and theaters – particularly small theaters – begin to struggle with what to provide for their patrons. There is always “A Christmas Carol,” and a wide variety of versions of it, and of plays about people performing it, exist. Still, that has been done so much that a theater out to make its own mark may turn to something else.

Sierra Madre Playhouse has pushed aside Dickens for Laura Ingalls Wilder, and brought back “A Little House Christmas” first produced there two years ago. Then it was all rather precious and stagey. This year’s production is thus a revelation. With a new, strong and naturalistic cast, a director who understands how to make the piece flow, and a feel of continuity – even with the injected period songs which once stood out like interruptions to the tale – this year’s “Little House” proves charming and sweet, but organically so.

The story is derived from one in Wilder’s “Little House on the Prairie”. Christmas approaches, the Wilders invite those who aided them as they built their barn to come out to the country for a celebration. Unfortunately, a gully-washing rainstorm begins, the creek starts to rise, the guests must leave quickly, and it soon becomes possible that even Santa may not be able to get to the Wilder home in time for the 25th. What will the Wilders do?

Director Alison Eliel Kalmus not only has a feel for the pacing and tone of this work, she also operates the AKT children’s theater company at SMP, from which were supplied most of the talented children who take significant parts (many of which are double-cast) in the play. The quality of the child actors proves particularly important in a story told from a little girl’s perspective, but the adults are not slouches either.

Among the adults, Rachel McLaughlan’s Ma radiates practical hopefulness, even as she seems weighted by the worries prairie women faced, and sings beautifully when called upon. Rich Cassone gives Pa the open-hearted life force one expects, balanced realistically with the limitations of time and place.

The children who performed on opening night were likewise un-stagey, and brought a humanizing force to the proceedings. Most especially, Sofia Naccarato’s innocently charming Laura and Katie-Grace Hansen’s Mary showed character, timing, total engagement with story and character, and – especially in Hansen’s case – strong and secure singing voices without that harsh Andrea McArdle overtone so common in youthful stage performers.

Adam Simon Krist and especially Patrick Geringer made the visiting young cousins likable and familiarly boyish. Samantha Salamoff, called upon mostly to be disgusted and moderately disengaged, did this well as the snobbish Nellie Oleson.

One of the real stars of this production has to be Stephen Gifford’s set, which takes all these remarkably realistic people and places them in time and space. Tanya Apuya’s costumes are likewise accurate and character-appropriate. There are little glitches now and then: people who are supposed to be soaking wet aren’t, and little girls sit around in their nightdresses on a winter evening when there is no dry wood for the fire without even wearing shawls, but somehow these seem minor when compared with the general genuineness of feeling this production has to offer.

In brief, this rendition of “A Little House Christmas” proves itself to be far less cloying, far better paced, and far more cohesive than SMP’s previous rendition. As a result, it makes for a fine, and comparatively unique, holiday treat for young and old. Certainly, it makes a break from the predictable Christmas fare.