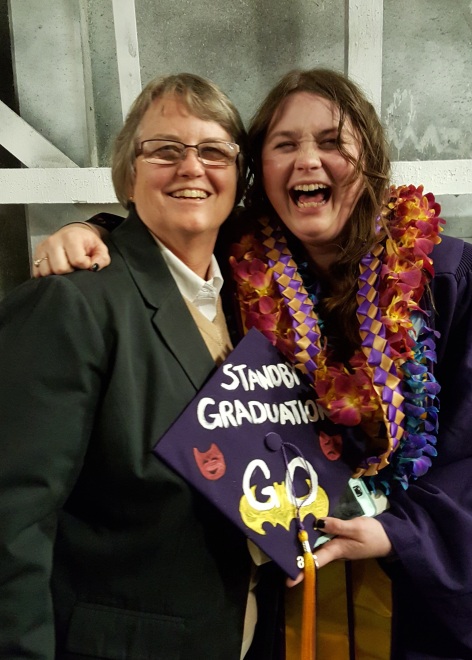 Proud mom with the newly minted grad, showing off the top of her mortar board, with her last college cue call: Stand by, Graduation… Go!

I have two children. They are grown now – one is about to turn 29, and the other is 25. Both are married – actually got married about two months apart. Both, as children, were members of the Los Angeles Children’s Chorus, touring Europe, singing with the L.A. Philharmonic, the Pasadena Symphony and the Hollywood Bowl Orchestra, and becoming child chorus members (even featured performers) and supernumeraries in productions of the Los Angeles Opera.

Being a part of LACC taught them a lot, and not just about music. They acquired a sense of professional discipline, a more global world view (when I asked my daughter about singing at the Vatican, all she wanted to discuss was what it was like to be in the streets of Rome the night Italy won the World Cup), and the virtues and rewards of hard work. They also learned to love the process of theater, and both were in school musicals in high school long after they’d left LACC behind. My son, as he grew older, began to focus more on computers, though he now helps run a company which provides services to the film and television industry.

My 25-year-old daughter, who ran the stage crew through the latter half of high school, has landed closer to her family’s theatrical roots. (Her dad and I met in the drama department of the University of the Pacific.) A bit more than a week ago, she graduated from San Francisco State University as a Technical Theatre major. She helped operate the scene shop, ran or helped run shows large and small (the most recent, tech directing a full-blown production of “Urinetown”) and is a techie to the core.

During this past year she has also been an intern at San Francisco’s Circus Center, where people learn how to perform circus acts. Just after graduation, she jumped into a gig as a house manager for a music festival. And on it goes. In this industry what she has accomplished is important. She’s, well, a she. She’s not quite 5’5″. She doesn’t tower over people and she’s not the strongest person in the shop, but she has proved over and over again, in a very male-dominated part of the theater business, that she knows what she’s doing and can get it done.

So, I’m a very proud mom. Congratulations, Mary Kate Nicholson-White. Who knows where she will land eventually, as her husband is an active-duty Sergeant in the US Marine Corps. But wherever she goes, she will be the woman in the room who can use all kinds of power tools, build a stable structure (even a multi-story one), understand how to run a production, and… well… do a whole lot of behind-the-scenes things. Yup. That’s my girl.