Leave a comment Posted by Frances Baum Nicholson on March 1, 2018 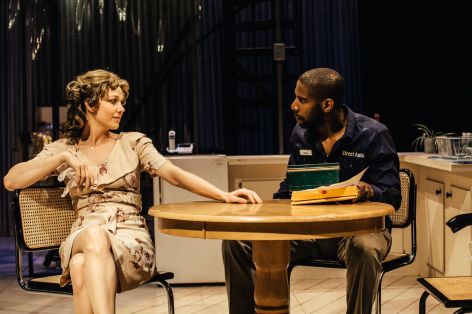 When I was in high school and college, casting of the shows produced there was founded primarily in giving the best performers a chance at the best roles. This often meant that traditionally white characters were played by persons of color (though, it should be noted, rarely the other way around for understandable sensitivity reasons – even then we were way, way, way beyond black face). As I moved out into dealing with productions in the larger world, this was no longer the case, as the rising voices of actors of color has pointed out. Indeed, that very thing is one which made the casting of “Hamilton” so rich: the wide variety of ethnicities playing this country’s not-nearly-that-diverse Framers.

So then, in this new openness, it should not be surprising when the often experimental The Theatre at Boston Court decides to diversify their production of Tennessee Williams’ classic “A Streetcar Named Desire.” Indeed, it provides another layer of symbolism in this tale rich in class intolerance, brutal reality, and the deep fantasy of the traditional South.

It is, of course, the tale of Blanche DuBois, a middle-aged single white woman from Mississippi who has lost the family home but still lives with the airs of a Southern belle. With nothing left, she travels from her small town to her married sister Stella’s home in the French Quarter of New Orleans. There she moves in with the sister and her rough-hewn brother-in-law, condemning both the marriage and their small apartment for not living up to the upbringing and status she finds worthy. As the play unfolds, the true story of Blanche’s own downfall, and her mental fragility, play out against the heightened dynamic of her sister’s marriage and her own wan hopes for a more gentle future.

At Boston Court, director Michael Michetti has placed the piece in a multicultural New Orleans, with the landlords upstairs as Latinos and both Stella and her husband Stanley as African American. With Blanche left as white, the underscore of social difference is illustrated far beyond the lines of the play (which are not changed to accommodate the ethnic shift – Stanley is still Polish, etc.). That it works as well as it does comes from the straightforward commitment of the actors themselves and the power of Williams’ characterizations. As a result, the story and the people in it simply expand beyond the visually obvious.

The one hitch in this “keep the script the same, but make the rest different” concept is the melding of the contemporary with a play first produced in 1947, not from an ethno-cultural standpoint, but in the small details. For example, Blanche speaks of telegrams, and talking to the telephone operator. Stella and Stanley carry cell phones. One can, and perhaps should, treat these oddities as yet another layer of her fantasy life, but it sometimes takes one out of the play to concentrate on rationalization. On the other hand, the music manipulated by sound designer and DJ Sam Sewell moves it into the contemporary. It is a conundrum.

Still, the performers keep the production compelling, regardless of the details of setting. Jaimi Paige gives Blanche the right combination of snooty airs and inner terror in ways which emphasize both her deeply annoying condescension and the terrible underpinnings her desperate keeping up of appearances conceals. Maya Lynne Robinson gives Stella a significant sense of command. Indeed the marriage of Stella and Stanley, even with its defined edges, has an unusually strong atmosphere of equality about it largely due to the way Robinson defines her role. Desean Kevin Terry walks that fine line with Stanley between the traditionally defined sense of maleness and a need to push against a belittling in his own home which seems to echo messages from outside it as well.

Luis Kelly-Duarte creates in Mitch, Blanche’s brief love interest, the kind of sensitivity which puts him squarely between the standards of Stanley and the needs of Blanche. Mariana Marroquin makes very interesting work of Eunice, the practical upstairs neighbor, while Joma Saenz makes her husband Steve just needy enough to create yet another layer of masculinity in the piece. In a small but standout role, Chris Ramirez turns the young bill collector at the door into a rich picture of innocence – the antithesis to the agendas of everyone else in the play.

Director Michetti creates an architecture of characters within a set which is itself an impressive piece of architecture. Efren Delgadillo, Jr. has designed the framework of the apartment in such a way that the audience – seated not only in front but along the sides – is allowed to look inside the lives of everyone in the building with a particular intimacy. Indeed, that is a hallmark of this production: its sense of intimacy, which makes all the human tragedies so much more engrossing.

In total, one can best say that this is “not your father’s/mother’s ‘Streetcar'” but that isn’t necessarily a bad thing. Go for the artistry. Put on your ability to suspend the literal, and look for the depth the Boston Court production has to give. It will be worth your time.