Leave a comment Posted by Frances Baum Nicholson on January 20, 2016 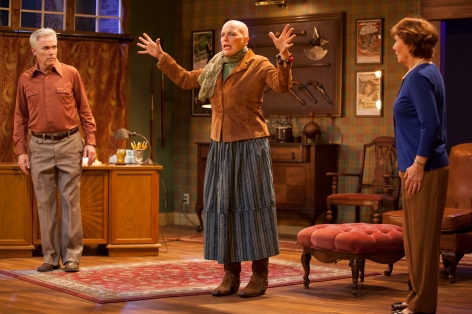 As fun as suspense-thriller plays are to watch, they are always difficult to review simply because one must tip-toe around the plot to avoid handing out unintended “spoilers”. Thus, a discussion of the Sierra Madre Playhouse production of “Deathtrap,” the wildly popular thriller which set records off-Broadway, may seem a bit cagey. Still, this production, which was postponed several times to accommodate the wild popularity of SMP’s “Always, Patsy Cline,” provides just enough fascinating red herrings, and just enough jump-out-of-your-seat surprises to be very satisfactory.

This is, in part, due to Ira Levin’s well crafted play itself, in part due to the stylish direction of SMP Artistic Director Christian Lebano, and in part due to a good, ensemble cast who can carry this whole complex construction off.

The tale surrounds frustrated, if famous playwright Sidney Bruhl. Though his fortune was made by hit suspense plays, his more recent ones have fallen flat. Now, steeped in deep writer’s block, he begins to imagine other ways of acquiring a hit script to move forward with. And this is when everything gets rather dark, and extremely convoluted.

Christopher Cappiello, as Bruhl, captures the frustration, the desperation, and the potentially fearsome calculation of a man who cannot be second rate. As his practical, if a bit wary wife, Shaw Purnell displays an opposing calm and content approach to life which may actually provide Bruhl with an added irritation. David Tolemy gives an increasing self-absorption to the playwriting workshop student Bruhl has taken under his wing, while – in a tiny but essential part – Don Savage creates the jolly, but practical voice of Bruhl’s legal advisor and friend.

Still, the absolute standout in this production has to be Karesa McElheny, as Bruhl’s neighbor – a famed psychic played as the most fascinating spiritual kook since Noel Coward’s Madame Arcati. Every time she enters the room, the energy rises.

Kudos go to set designer John Vertrees. I am genuinely amazed at how much real estate he managed to get onto the tiny SMP stage, and how polished it looks. Also polished are the costumes of Vicki Conrad and Ken Merckx’s fight choreography. If there is one fly in the ointment it is that some of the antique pistols used in the play will, to anyone who knows how firearms work, be anomalous with what they are supposed to do. Other than that, the polish is constant.

There is a reason “Deathtrap” lasted so long in New York. Its twists are genuinely startling, and certainly not for either the intolerant or the faint of heart. It also offers up a rather comic, if occasionally disturbing, view of the deep and profound nature of writer’s block which can warp the imagination of anyone who makes a living by the written word.

As produced at Sierra Madre Playhouse, the suspense stays constant, suspicion of everyone allows for edge-of-your-seat viewing, and that satisfying kind of anxiousness which makes suspense stories fun doesn’t let up until the final curtain. “Deathtrap” may not be deep, but it is filled with memorable characters and great weirdnesses of plot. And that can make for one entertaining evening. One warning: due to some of the violence and a few more adult situations, I would not suggest bringing young children.