Leave a comment Posted by Frances Baum Nicholson on November 12, 2015

The Whittier Community Theatre, now in the midst of its 94th consecutive season, has admittedly had its ups and downs, but when they do something right, they really do it right. Take as prime example their current production of Albert Hackett and Frances Goodrich’s adaptation of “The Diary of Anne Frank.” This deeply touching and absolutely true story of Jewish families hiding from the Nazis in a Dutch attic, as described to her diary by the teenaged Anne, cannot help but be affecting. Now, between casting, pacing and even the set design, WTC has brought the tale to life with an appropriate, clean vividness. As we, this year, mark the 70th anniversary of the defeat of Hitler, the show proves both instructional and endearing.

The tale is part of the modern psyche. After the liberation of western Europe Anne’s father returned to the attic where he, his family and several others had hidden for three years. Among the things left behind was the diary he had given his younger daughter, Anne, as they entered that attic. An aspiring writer, she dedicated long hours to describing their time there, philosophizing about the human race, and dreaming of a time beyond their self-imposed captivity.

Director Lenore Stjerne has gathered a cast of performers who not only embody the characters in that attic with skill, but look the parts as well. Richard De Vicariis, in perhaps his best role, plays Anne’s father Otto, the group’s central organizer and a man intent on keeping his humanity in the midst of claustrophobic human strife. Patty Rangel is Anne’s mother Edith, domestic and practical and desperately trying to maintain a sense of community.

James J. Cox is the somewhat questionable, bitter friend Otto feels he must pay back by bringing to the attic, while Joan Meissenburg makes interesting work of his materialistic, desperate wife. Tim Heaton gives the hermit-like last-minute addition to the group a petulant angst which helps define the tensions of this captive group. Casey Morlet makes a sympathetic Miep, the young woman who continued to supply the group with basic necessities throughout their isolation. John Francis makes Otto’s employee, and Miep’s partner in secrecy, a fragile but dedicated man.

Fitted in with this are the three young people, who define the specific conflicts of energy, desperation and hope. Wesley Mathews makes the shy, introverted Peter into a careful but deep thinker. Brenna Hanlen gives Anne’s older sister Margot a calm fatalism which provides interesting counter-balance to Anne’s optimism. And, as Anne – narrator of her own story and rich optimist about human nature – Gracie Lacey leads the cast in every possible way.

Thanks to Suzanne Frederickson’s set design, which utilizes the large Whittier stage while still giving a sense of the limited attic space, Stjerne can keep the flow going in such a way that one remains enraptured with the story. This is good, because the play is a long one – the first act an hour and a half – but the general quality means you don’t notice the passage of time. The costumes, created and coordinated by Karen Jacobson, accurately reflect time and place. Indeed, this whole production shows an extraordinary attention to detail, and a respect for the content which makes it a success.

In short, this “The Diary of Anne Frank” is most certainly worth seeing. I would also recommend it for young people who may not have been exposed to the book. Personally, my grandmother gave me a copy when I turned 10, with an introduction by Eleanor Roosevelt. This is powerful stuff, and as we reach a stage of history where almost all those who survived the horrors of the Holocaust have passed away, it behooves us to take the time to remind ourselves what they went through. Perhaps such remembrances can mean that one day we will reach a world where genocide itself is a thing of the past. Anne Frank seemed to think we might.

Leave a comment Posted by Frances Baum Nicholson on September 17, 2015 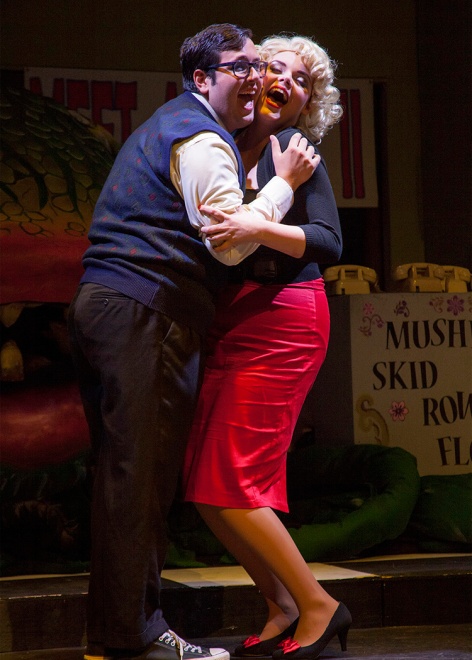 In the treasure-trove of lighthearted, silly musicals, Howard Ashman and Alan Menken’s “Little Shop of Horrors” has to one of the most universally beloved. Based on a “B” horror film by Roger Corman, twisted to be firmly tongue-in-cheek, it becomes a send-up of every element of early 1960s cultural framework. Now the Whittier Community Theatre brings the show to the stage once more, accompanied by a live band and filled with a youthful energy.

The tale is silly from the start. Seymour Krelborn and Audrey work at Mushnik’s Florist Shop on Skid Row. For obvious reasons, the store is struggling until Seymour produces one of his collection of exotic plants – a completely unique piece of vegetation which fascinates the public and makes the shop famous. As they cope with the rising fame, and the unique dietary habits of the plant, Seymour also worries over how to save Audrey from her sadistic boyfriend, and whether the fame he’s achieving is worth the emotional and physical cost.

Director Karen Jacobson has gathered a sharp cast to bring this lovely trifle to life. Jonathan Tupanjanin sings up a storm and looks appropriately nerdy as the hapless Seymour. Mallory Kerwin matches Tupanjanin note for note, and certainly acts the part as the voluptuously innocent Audrey. Richard De Vicaris appears in his element as the crusty, accusatory Mushnik. Matthew Berardi puts his all into the slimy boyfriend who orders Audrey around.

The show’s only major issue, which touches the leads but is most frustrating with the narrating chorus, is the uneven power and effectiveness of the performer’s body mics. Most particularly with the chorus, Mindy Duong’s Chiffon and Gracie Lacey’s Chrystal go back and forth between whose mic is on too loud, and Jenae Denise Thompson’s Ronnette often seems to not have a mic at all, which destroys the classic girl-group harmonies of their signature moments. The performers themselves sing well (though Lacey is sometimes a touch flat) but when you can only hear one of them at a time, the impact is less than stellar.

Sam Maytubby and Steven Sandborn handle the physical maneuvers of the plant life, soon named Audrey II, while Bear C.A. Sanchez gives the plant a dominating voice. The rest of the cast, an ensemble of skid row residents, sing very well, move necessary set pieces when needed, and provide a few cameo parts. Kevin Wiley’s five piece ensemble provides some of the best musical accompaniment I’ve heard at a WCT production. Indeed, with the exception of the mic glitches, the show proves one of the most polished musicals of their recent past.

Kudos go to Mark and Suzanne Frederickson for the set design, which offers a chance for the quick scenic moves so necessary to this fast-paced tale. Patty Rangel and Nancy Tyler provide just the right costumes to make the piece work.

With “Little Shop of Horrors” WCT marks the start of their 94th season. That alone is worthy of recognition. That they should be able to put up an essentially amateur production with the qualities found in this one is both remarkable and deeply satisfying. Go take a look. You’ll laugh a lot, especially if you’ve never seen the show, and help support a venerable institution working to stay relevant long into the future.