Leave a comment Posted by Frances Baum Nicholson on December 16, 2017

Since 1983 the film “A Christmas Story” has been a part of many a family’s holiday traditions. Based on the writings of Jean Shepherd it offered nostalgia for a simpler time in small-town America. There, a boy in the midst of the usual drama of growing up, focuses on convincing either Santa or his parents to bring him the one thing he wants most for Christmas: a Red Ryder Carbine Action 200-shot Range Model air rifle with a compass in the stock and “this thing which tells time”.

More recently the tale has become a play, based not just on the film but on other nostalgic Shepherd’s writings. Done right, it can have the same charm as the film in a more immediate format.

Now at Sierra Madre Playhouse comes a chance to see it done right. From gifted child performers to solid and artful direction, through a remarkable-for-SMP set (considering the size of their stage) and a unified sense of ensemble, there is much to enjoy in what even the theater’s artistic director pegs as “one of the most ambitious plays” they have ever mounted.

The children in the production, and there are seven strong character parts for young people in the play, are double-cast. In the version I attended Ralphie was played by Julian Moser, whose earnestness and subtlety of character carried the production in impressive fashion. Myles Hutchinson and Jude Gomez were equally convincing as Ralphie’s two pals,

But to lay the success of this production entirely at the feet of its talented youth would be to miss several other performances of note. As Ralphie’s imposing, world-weary teacher, and as the store employee serving as Santa’s definitely disenchanted elf, Danon Dastugue finds the neat balance between humor and bitterness which makes both characters highly entertaining.

Richard Van Slyke makes Ralphie’s father’s obsessions and character quirks as naturally warm as the tale permits, while Andrea Stradling proves the epitome of the midwestern, midcentury mom. Jackson Kendall gives the adult Ralph looking back on this storyline a lot more character than that of simple narrator, providing the glue which holds the piece together.

All these fine folks operate in this episodic tale on Charles Erven’s remarkable, and impressively flexible set, which lighting designer Derek Jones transforms, along with portions of SMP’s audience space, into something bigger than one thought could fit into this size of theater. The costumes courtesy of Shon LeBlanc, long known for his sense of period, round out the visuals in important ways. Still, the ensemble, the flow and movement of the piece, and the unified spark which push this show to its potential land solidly at the feet of director Christian Lebano. His affection for this show and his understanding of the need to pacing tight make the whole enterprise work.

So, if you are looking for something to watch to get you into the holiday mood, but have had enough of A Christmas Carol to last you awhile, why not try this show. It’s a change of pace, it’s very well done, and it will leave you thinking warm thoughts about the spirit, and the silliness, of this time of year. Children are more than welcome, though very young ones may find its humor goes over their heads.

Leave a comment Posted by Frances Baum Nicholson on August 15, 2016

I’m always fascinated by how shows on local stages go in waves. All of a sudden, within maybe a two-year span, the same play or musical will sprout in several different productions. The down-side is that often this can mean the piece – originally fun to see – gets beaten to death by sheer repetition. To some extent, this has been true of the small, clever musical “The 25th Annual Putnam County Spelling Bee”.

It is that very fact which made the production of “Spelling Bee” running at Sierra Madre Playhouse all the more surprising. Even after seeing so many other renditions, this one proved especially captivating: totally on target in both character and energy (not to mention talent) from beginning to end.

The tale developed from an improv, and has that kind of quirky charm. Victors of local contests gather for the county bee which will vault the winner into the national finals. The pressure is intense, and the combination of nerdiness, neediness, and adolescent angst means all the contestants have scenarios running through their heads throughout the day. The hostess, herself a former winner, relives her glory days as a bonafide victor, while the edgy middle school vice-principal reads the competition words and a street tough doing community service provides “comfort” (meaning a juice box and a hug) to those who fail.

The ensemble cast works together seamlessly, as the story progresses with side-notes of internal fantasy throughout the competition. In the process, each “child” character has a specific and well-defined if often quirky charm. Joey Acuna, Jr. creates a delightfully hormonal Chip – the previous year’s champion wrestling with both a need to repeat and an intensifying interest in girls. Robert Michael Parkinson as Leaf, a deeply innocent child of hippie parents who gradually realizes he’s smart, often captures the heart.

Joy Regullano’s Marcy embodies all the internalized pressures of having to be perfect, while Hannah Leventhal’s intense Logainne wrestles with her own excitement, her two dads’ expectations, and a certain underlying moral force. Yet among the competitors the standouts – both in characters as designed, and as played – have to be Stanton Kane Morales’ weirdly earnest Barfee, and Cristina Gerla’s profoundly fragile Olive, who more than in any other version of this I’ve seen, find a genuine connection born of their own isolation.

Richard Van Slyke gives a nicely anxious vibe to the vice-principal. Gina D’Acciaro embodies all the odd twists of a middle-aged woman looking back to her childhood victory as the best moment in her life. Jaq Galliano does more with Mitch, the street tough, than the norm, as he wrestles with a genuine sympathy for these kids who haven’t seen real pain yet as well as his character’s completely inadequate role in providing them comfort.

Director/choreographer Robert Marra has melded all these find individuals into a well-paced, active and engaging whole. His choreography uses the small SMP stage to its full extent, especially in Marcy’s defining song. The audience volunteers who are always a part of “Spelling Bee” are also incorporated far more naturally into the show than usual, yet another sign of the solid sense of ensemble established onstage. A. Jeffrey Schoenberg creates just the right costumes, Jeff Cason does wonders with the lighting (as the set itself he has designed is the usual “Spelling Bee” minimalism), and Joe Lawrence’s musical direction keeps the show tuneful and fluid.

In short, this is – bar none – the best version of “The 25th Annual Putnam County Spelling Bee” I have seen. It is charming, heart-felt, active and engaging. One must warn that it does have a few references to adult themes (particularly in the case of Chip’s rising adolescence), but offers a lot of laughter, much of it laughter of recognition. It also only has one weekend left, so hurry out and see this treat of a show. You will be glad you did.

Leave a comment Posted by Frances Baum Nicholson on May 28, 2015 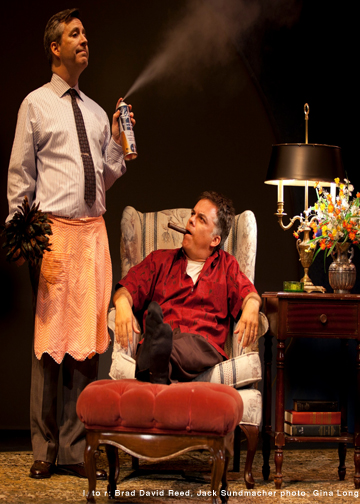 I doubt there is a single offering from the prolific Neil Simon more recognizable than “The Odd Couple.” From the hit Broadway play, to the hit Hollywood movie, to the long-running comedy TV series, “The Odd Couple” has entered the language. Profoundly tidy people are called Felixes, and most Americans – at least those of a certain age – immediately know what that means.

Now Sierra Madre Playhouse has opened a new production of this time-honored play. Well done from start to finish, it highlights just how funny Simon’s play is, and how little it has aged – especially if (as this one is) it is set in its original timeframe of the mid-60s.

By now everyone knows the general idea. Oscar Madison, a determinedly slob by divorced man behind on his child support payments takes in his poker buddy, Felix Unger, when Felix’s wife kicks him out. Felix is obsessively clean and a meticulous cook, and soon the two opposite behavior patterns make their friendship fray. This, especially, when they plan an encounter with two silly British sisters from their apartment building.

The SMP production proves well cast from the outset, as the entire ensemble of poker-playing pals not only look just right, but sound just as they should. As one of the two central figures, Jack Sundmacher’s Oscar is a bit less oafish than sometimes, but that emphasizes the situational aspect of his sloppiness. Brad David Reed is a bit less comic in his moroseness than some versions of Felix, but it works into the comedy in a different, less derivative way. This is a good thing.

Highlights of the SMP cast are Kari Lee and Jane Lui as the giggly Pigeon sisters – the girls from upstairs. They are truly comic from first to last. The fascinating choice of making them Asian as well as British highlights the internationalism of New York, Britain and comedy in general – a good choice all around. As the weekly poker players, Vince DonVito, Joe Langer, Richard Van Slyke, and most especially Steve Bean, as Murray the policeman, provide the buddies who give this elementally male story its energy.

Director Alan Brooks has used the comparatively small SMP stage to the utmost, utilizing John Vertrees’ set design which artfully creates all the complexities of a NY apartment in that limited area. The costuming by Angela Nicholas centers the piece and – particularly in the case of the Pigeon sisters – emphasizes the comedy on occasion.

For those who somehow have never seen “The Odd Couple” this is a great place to start. For those who have, do not expect the characterizations here to be mirrors of the ones by Walter Matthau and Jack Lemmon or Jack Klugman and Tony Randall. These actors have created their own sense of what Oscar and Felix should be, and that is one of the pleasures of seeing the production. So do.